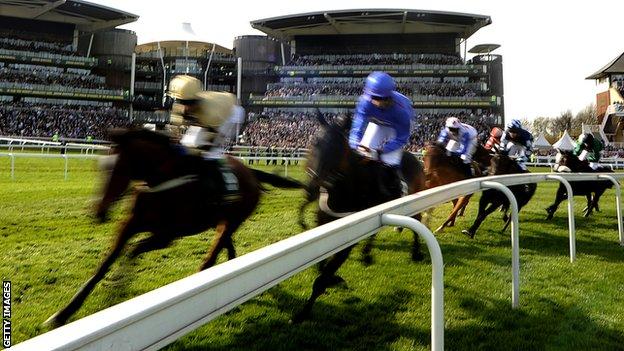 Bookies' favourite Prince De Beauchene will miss the Grand National on 14 April with a stress fracture to the hip, owner Graham Wylie has revealed.

"He is going to need 12 weeks box rest and that means he's going to have to miss Aintree," Wylie said.

The Willie Mullins-trained horse had risen to the head of the betting after a stirring performance in the Bobbyjo Chase at Fairyhouse in February.

Scans revealed the season-ending injury after a recent training run-out.

"He went to Fairyhouse a few days ago and Ruby [Walsh] rode him, but he wasn't happy afterwards," Wylie continued.

"It's disappointing, but that's horses for you. It's better we've discovered it now than during the race.

"We'll give him a bit of time and hopefully he'll be back next season."