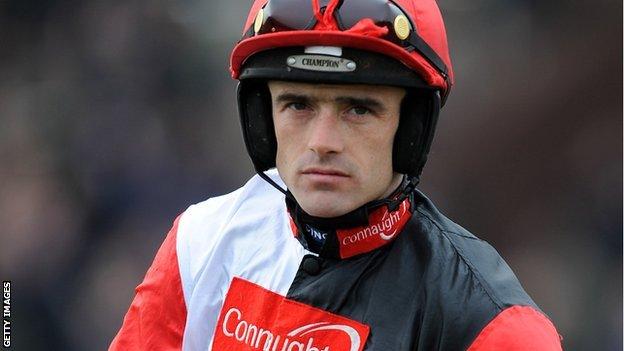 Ruby Walsh has chosen to ride On His Own in the Grand National on 14 April.

Walsh, who won the big one at Aintree on Papillon in 2000 and Hedgehunter in 2005, selected the Willie Mullins-trained horse from several options.

"After some pleasing work on the gallops this week, Ruby has decided to ride On His Own," Mullins said.

Walsh's sister Katie is now likely to ride Seabass for their trainer father Ted as she bids to become the first female jockey to win the National.

Ruby had initially been expected to be on Prince De Beauchene for champion Irish trainer Mullins until the favourite was ruled out with injury a week ago.

He also had the chance to team up with Neptune Collonges for English champion trainer Paul Nicholls, but the grey will be partnered by Daryl Jacob.

Walsh rode Hedgehunter to victory for Mullins, while his first win in the big Aintree race was for his father.

On His Own, owned by Graham Wylie, was rated about a 20-1 chance by bookmakers for the four-and-a-half mile marathon after winning the Thyestes Chase at Gowran Park in January.

The eight-year-old's odds are likely to contract with the news that dual National winner Walsh will be on board.

Wylie has leased the horse for the day to the Children's Heart Unit at the Freeman Hospital in Newcastle, which will receive any prize money.

His baby daughter had successful open heart surgery at the hospital.

Cheltenham Gold Cup winner Synchronised, the likely mount of champion jockey Tony McCoy, is among the favourites for the race, along with Junior.