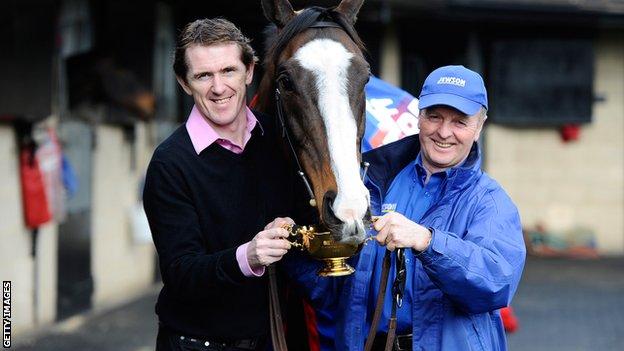 Synchronised is set to undergo one final training run before it is confirmed whether he will take his place in this weekend's Grand National.

He is aiming to make Aintree history as the first horse since 1934 to win the Gold Cup and National in the same year.

"He'll do his final bit of work in the morning and we'll see how he is, but it's so far so good," said racing manager Frank Berry.

The horse could be one of four horses competing from Jonjo O'Neill's stables.

"He's not doing a lot in the morning, just a little, and if all is well he will go there," added Berry.

"Sunnyhillboy is well. He came out of Cheltenham fine and is in good form.

"With a bit of luck he should go well round there as long as he takes to the place.

"We should have four runners [Quiscover Fontaine and Arbor Supreme are the others] and we have one [Smoking Aces] waiting to get in."

JP McManus, O'Neill and jockey Tony McCoy tasted National glory with Don't Push It two years ago and he was third to Ballabriggs 12 months ago.

Ballabriggs is ready to run in only his second National but will attempt back-to-back victories, a feat last achieved by his trainer Donald McCain's father Ginger in 1974 with Red Rum.

"It would be amazing if he could do it again. It's a big ask, but he has got a chance."