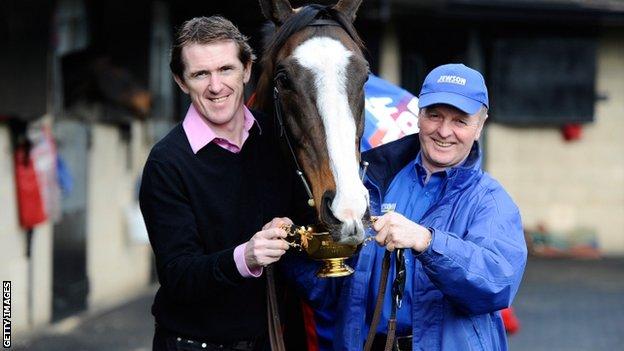 The Jonjo O'Neill-trained top weight is aiming to become the first horse since Golden Miller in 1934 to follow a Gold Cup victory with a Grand National win.

"If you said a year ago he had chance of winning the Gold Cup then people would have laughed," Synchronised jockey McCoy told BBC Radio 5 live.

Named BBC Sports Personality of the Year in December 2010

"Jonjo was always thought he was more of a Grand National horse."

And on the rare double: "Why not. Look, life is about being different. In this case, it's about doing things people haven't done before and have not done in long time."

The Gold Cup in March was billed as a straight duel between Kauto Star and Long Run, but when the former pulled up, McCoy produced one of the great rides in recent years to guide Synchronised to victory.

"The thing with the Gold Cup was about keeping him in contention," added McCoy, whose horse was only sixth approaching the final furlongs.

"I thought from a long way out he was going to win because he was close enough.

"He has great stamina and a will to win. He has more heart than abilty and talent, and that's what you need to win the National.