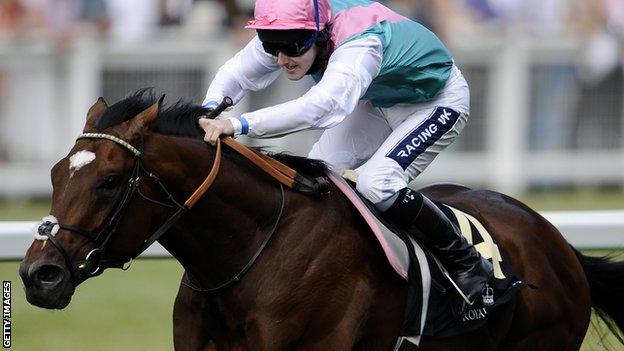 Frankel has been cleared to return to training following a second scan on a "superficial" leg injury.

The 2,000 Guineas winner suffered the injury in Newmarket on Wednesday and required a further scan after it was feared the problem could be serious.

But owner Khalid Abdullah's racing manager Teddy Grimthorpe said: "Frankel has been given the all-clear. There was no evidence of any tendon damage."

The 2011 Cartier horse of the year can now resume his normal training regime.

Following the injury, it looked unlikely that Frankel would be able to compete in the JLT Lockinge Stakes at Newbury on 19 May.

But this could still remain a possibility according to Grimthorpe.

"There is no set agenda for his future racing programme, which will be determined by the progress he makes. At this stage, the Lockinge Stakes has not yet been ruled out," he said.

The Galileo colt, who is trained by Sir Henry Cecil, has won each of his nine starts to date, including wins in the 2,000 Guineas, the St James's Palace Stakes, the Sussex Stakes and the £1m Queen Elizabeth II Stakes.