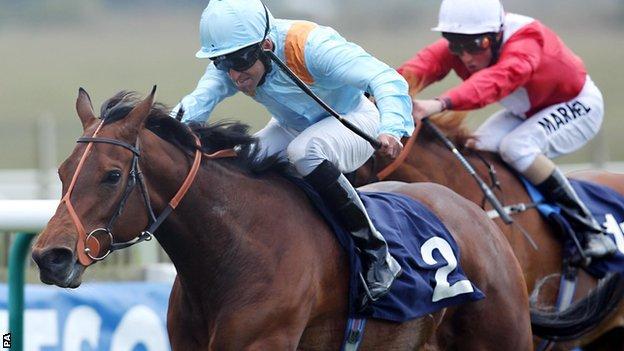 Esentepe won the big race of day one at Newmarket as its flat season got under way on Wednesday.

The 28-1 shot won the Lanwades Stud Nell Gwyn Stakes for Richard Hannon and Pat Dobbs after just one win from its 10 previous racecourse starts.

The three-year-old found itself in front after pacesetter Excelette weakened, and finished clear of Nayarra, with Lily's Angel third.

Brian Meehan's horse, the son of Giant's Causeway and being ridden by Martin Dwyer, won by almost three lengths from Nine Realms and Periphery.

The third race of the day, the Tattersalls Millions 3-Y-O Sprint, was won by Valbchek. The joint favourite (100-30) held off Swiss Spirit and Tidentime and trainer Jeremy Noseda said: "I'm delighted - we sent him to Lingfield to get in a run at six furlongs, with an eye on coming here, so it's great when a plan comes to fruition."

Telwaar (9-2) left it late to beat Bannock to win the Bet At Bluesquare.com European Free Handicap.

Stipulate (8-1) held off Mister Music for victory in the The Blue Square Feilden Stakes, while Model Pupil (6-1) overcame Shantaram and Yazdi to win the Blue Square Maiden Stakes.

The Blue Square Handicap Stakes, the final race of the day, was won by Cockney Sparrow (5-1) with joint favourite Cape Safari second.