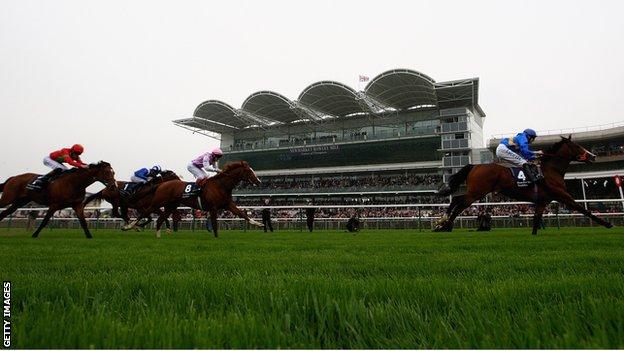 Trumpet Major won the Craven Stakes at Newmarket in a one-two for trainer Richard Hannon, with stablemate Crius the runner-up.

Ryan Moore guided the 9-2 chance to an impressive five-length success, with Eastern Sun back in third.

The victory sealed a Hannon treble after wins for Tassel and Rougemont.

Ante-post favourite Most Improved missed the race and is a doubt for the 2,000 Guineas after being found to be slightly lame.

The horse, trained by Brian Meehan, was 4-1 second favourite behind Camelot for the 5 May Newmarket Classic before his odds drifted slightly on missing his return.

Trumpet Major was fifth last time out in the Dewhurst Stakes won by Parish Hall, with Most Improved in third.

Despite giving 3lb in weight to his rivals, Hannon's colt travelled well throughout on his seasonal return and quickly pulled clear of the opposition when asked to accelerate by Moore.

"He did that very well under a 3lb penalty. I wasn't sure he'd like the ground and he'll have needed it but he'll have to take his chance in the Guineas now," said Hannon.

The 6-5 favourite Tassel, who is owned by a syndicate including former Olympic heptathlon champion Denise Lewis, took the opening maiden fillies' stakes while Rougemont triumphed in the Tattersalls Millions 3-Y-O Trophy.

Questioning, trained by John Gosden, survived a stewards' inquiry after just edging out multiple Group One winner Twice Over to win the Earl of Sefton Stakes.

Meanwhile, Meehan said he hoped the problem in Most Improved's near foreleg would prove to be a temporary setback.

"We will closely monitor the situation in conjunction with the vets and as soon as they have cleared him we will keep everyone informed," he said.

Most Improved had been backed down from 40-1 in February for the Guineas.

Meehan, who trains at Manton in Wiltshire, said the lameness was discovered on Thursday morning as preparations were being made to leave for Newmarket.

No decision has yet been made on whether the Aidan O'Brien-trained Racing Post Trophy winner Camelot will run in the 2,000 Guineas.

"Obviously we've an eye on the Guineas with him and he's open to all other things," O'Brien told At The Races.