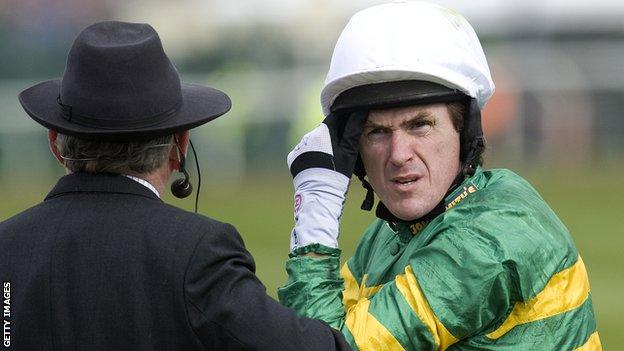 AP McCoy and Ruby Walsh returned to action at Ayr on Friday after being injured at the Grand National meeting.

Walsh picked up a winner as he rode 5-1 chance The Knoxs to victory with McCoy out of the places on Divers in the two-and-a-half mile handicap chase.

Champion jockey McCoy picked up a knock when the ill-fated Synchronised fell in Saturday's National.

Walsh recovered from a head injury after a fall in the Aintree Hurdle for three rides at the Scottish track.

He is due to ride favourite Harry The Viking, who is part-owned by Sir Alex Ferguson, in the Scottish National on Satuday, while McCoy is on the Jonjo O'Neill-trained Galaxy Rock.

The horse suffered a fractured leg five fences later after continuing riderless and had to be put down.

He had two rides at Ayr on Friday, with 3-1 favourite Merry King also out of the frame in the day's final race.