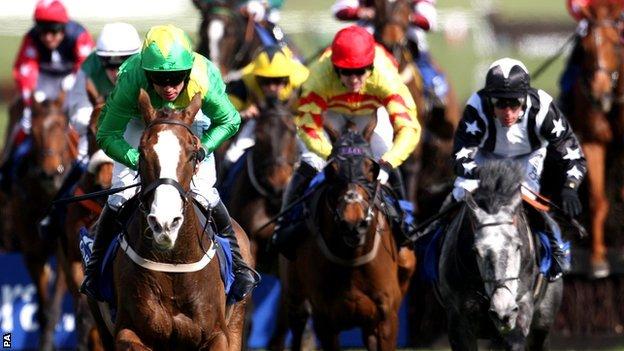 Merigo clinched his second Scottish Grand National in three years after a thrilling finish to the Ayr marathon.

The 11-year-old, who was second last year, won by a head from Auroras Encore after the pair went clear three out.

All credit to how deep he dug for me. I couldn't go any quicker and his jumping was keeping him it

King Fontaine (40-1) was 15 lengths behind in third with Ballyfitz (33-1) another nine lengths back in fourth.

Ireland's Garleton and Fruity O'Rooney made the early running and the task proved too much for several competitors with Quentin Collonges, Walkon, Ikorodu Road and Knockara Beau among those pulled up.

Garleton gave way down the back straight and Auroras Encore (25-1) and jockey Ryan Mania took control, tracked by Merigo.

The pair were well clear over the last and locked in a tight battle to the line, but veteran jockey Timmy Murphy urged on the 15-2 second favourite to a narrow win for his father-in-law Raymond Anderson Green and Lockerbie-based trainer Andrew Parker.

"He's a superstar," said Murphy. "The choke was out for a long way and all credit to how deep he dug for me. I couldn't go any quicker and his jumping was keeping him it. He's a great horse to own and ride."

Parker said: "He's a horse that takes some getting fit - look at the size of him - and he still looks unfit now, but that's him.

What a triumph for the Grand National 'brand' the Merigo team provided, a week after it took a bit of a battering at Aintree.

An historic second win in Scotland's top jump race by a horse that's one of just a dozen under the care of his (Scottish) trainer is just what the 'brand' was made for.

Hats off to Merigo, described with a smile by his jockey as 'the ugliest racehorse I've seen', but a real beauty at Ayr when it mattered.

"He loves Ayr, he loves the sun on his back. He's just a different horse here than anywhere else.

"I thought we might be struggling, but one thing he has got is the heart of a lion."

Anderson Green, who pocketed £180,000 prize money, said: "To win it once is dreamland. To come back and do it again - words can't describe it. It means everything to me to win this race."

Prior to the race and in light of recent fatalities at the Grand National at Aintree, Ayr racecourse introduced extra safety measures for the chase. Ten of the 24 runners finished and none of the field fell in the four-mile chase.

However, there was a slight sting in the tail for Murphy as he was banned for four days in May for using his whip above the permitted limit.