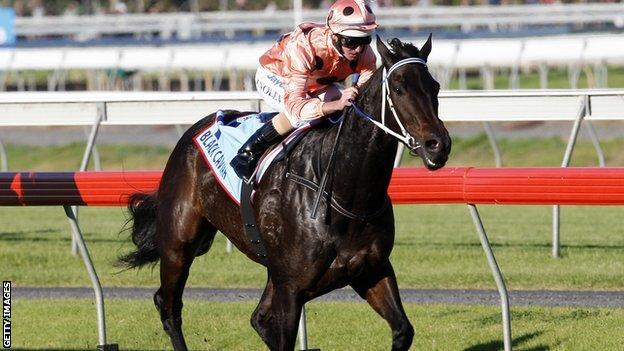 The five-year-old set the new mark over six furlongs in a Group One race at Morphettville, Adelaide.

Jockey Luke Nolen said: "We've got the best sprinters in the world here in Australia and she is the Queen of them, so Ascot holds no fears."

Black Caviar is expected to race in the Goodwood Stakes at the same track in two weeks before flying to England to compete at Royal Ascot on 23 June.

"We haven't been on a plane with her before and it's a long way from home," Nolen added.

"But she's got a great constitution and a lovely nature to go with it, so I'm sure she'll cope with it fine.

"She's a mare who appreciates a straight track. Ascot is going to play right to her strengths."

Black Caviar has been installed as favourite by bookmakers for the race, ahead of local sprinters Bated Breath and Hoof It.

The mare could also run at Newmarket on 14 July in the July Cup, another leg of the Global Sprint Challenge.