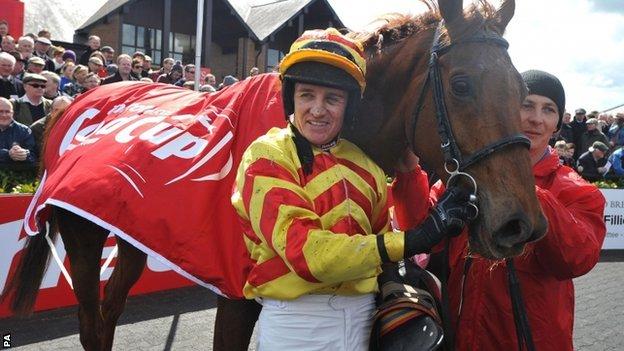 Barry Geraghty's mount finished fourth in Tuesday's Champion Chase but showed no ill-effects from that run.

He looked in good form throughout, first moving past Quel Esprit and Rubi Light at the second last.

Geraghty then guided China Rock over the last obstacle in style before easing by last year's winner Follow The Plan to win by five lengths.

The race, the feature of the Festival, was due to be run on Wednesday but heavy rain made the chase couse unraceable.

China Rock, trained by Mouse Morris, was sporting a first-time tongue tie and jockey Geraghty knew he had a shot at glory some way from home.

"He won on merit. He jumped and travelled away and just kept travelling," he said.

"As we pressed on up to what was the second last, I was travelling better than the two in front.

"He has been competitive in very good races, he has been at this level before but he just hasn't been of late.

"He jumped and he travelled and he saw out the race where he hasn't been seeing out his races in the past."