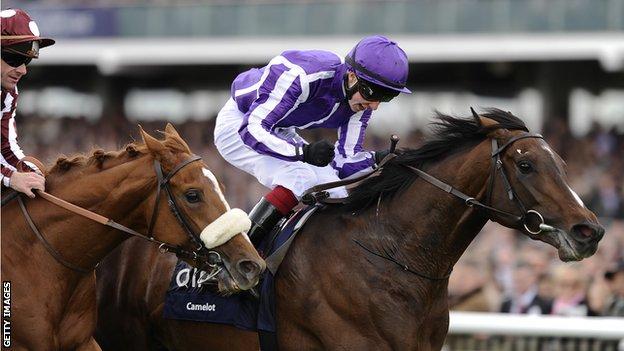 Favourite Camelot powered home in the 2,000 Guineas at Newmarket as trainer Aidan O'Brien won the first Classic of the season for the sixth time.

Camelot edged 12-1 shot French Fifteen by a neck to become only the third favourite in 19 years to take the race.

The 15-8 shot got caught in the pack in the early stages, but charged through with a furlong to go.

Caspar Netscher and Trumpet Major headed the leading pack from the stalls with Camelot's hopes of building on his status as the ante-post favourite seeming forlorn as he became bogged down at the rear.

The leading duo attempted to break clear with two furlongs to go, but they had not counted on the winning mount's stamina as O'Brien skilfully guided him through the field on the near side.

"He has a lot of class and speed, I always felt I was getting there," the 18-year-old said.

"He got a bit tired in the last 100 yards on his first run [of the season] but hopefully he will come on for it.

"I didn't get the best run through, I was a long way back but he was very relaxed and will be much better going a bit further."

Camelot's finish indicated he would be suited by the half a mile longer trip in the Derby at Epsom on 2 June.

"It's like it always is," Aidan O'Brien said. "We will go home and the lads [owners] will talk about it [the Derby] and make a decision.

"We have lots to look forward to and we'll take it one race at a time.

"You would imagine looking at him [that] the Derby would be a very suitable race for him."