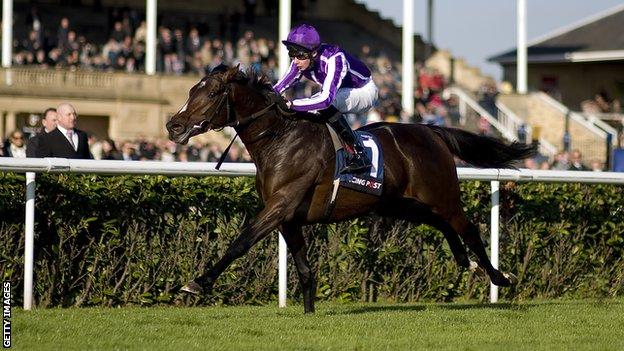 Trainer John Gosden has given his runner Fencing little hope in the 2,000 Guineas, instead backing Aidan O'Brien's "high class" Camelot.

The two horses met in the Racing Post Stakes at Doncaster, with Camelot coming out on top.

Gosden told BBC Radio Cambridgeshire: "He went past us like we were standing still. I'd go with Camelot because he was supremely smooth when he beat us.

"He accelerated as a really high class horse," he added.

"He to me is legitimate favourite and will show them all a clean set of heels."

Camelot, who will be ridden by O'Brien's son Joseph at Newmarket on Saturday, heads a field including three French contenders in Abtaal, French Fifteen and Hermival.

"But is their Group One form better than ours? Aidan's horses are coming into good form. I'd be surprised to see anybody lower Camelot's colours."

As for Fencing, Gosden has frequently spoken highly of the Newmarket-trained three-year-old.

But after missing last month's Craven meeting, he is poised to make his season debut in the upcoming Classic.

"He's coming into this race off a race course gallop," said Gosden.

"But I can see him improving a lot and going onto a race like the Dante at York.

"I wouldn't expect him to be exactly at his peak first race. When you miss your prep you're a little bit on the back foot. I wouldn't be expecting him to win."