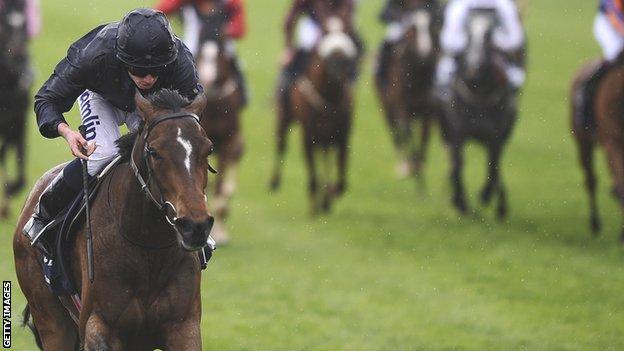 The race was marred by Gray Pearl being fatally injured in the stalls, which led to a half-hour delay.

Maybe was the 13-8 favourite but stablemate Homecoming Queen set off at a blistering gallop and Joseph O'Brien's mount never looked content.

Moore kicked on again going into the dip aboard Ballydoyle's supposed second string and the daughter of Holy Roman Emperor stretched clear.

It was the first victory in the Newmarket fillies' Classic for Moore, who said: "Aidan said she was very fit and very well.

"I thought I was going a stride too quick, but she just kept going. There's not much of her, but she tries very hard. She's very tough."

Gray Pearl's death in the starting stalls meant it was a very subdued crowd that greeted Moore in the unsaddling enclosure and he described the events as "very sad".

The horse became wedged under the stalls in a freak incident that came one month after two horses were killed in the Grand National at Aintree.

Racegoers feared the worst when screens were put up across the centre of the course and Gray Pearl had to be put down after suffering what vets called "an apparent spinal injury".

Veterinary officer Chris Hammond said: "To minimise distress to the filly, a decision was made to have her put down on welfare grounds."