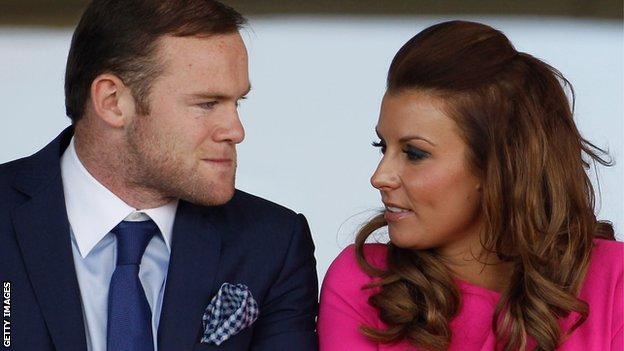 Wayne Rooney's colt Pippy will make his debut in the opening race of Chester's May meeting on Wednesday.

Pippy is one of four horses in the race trained by Tom Dascombe at the Cheshire stables owned by Rooney's Manchester United team-mate Michael Owen.

Pippy will give Rooney, and his wife Coleen, a first taste of racehorse ownership.

The couple bought three horses to be trained by Dascombe and have chosen pink and white racing silks to be worn by their jockeys.

"Pippy is fine. He's quite a nice little horse, but we're obviously throwing him in at the deep end," said Dascombe.

"He'll be doing his best and if he doesn't win, I'm sure he'll win a maiden in the not too distant future."

Overturn, trained by Donald McCain, has 11lb more to carry than 12 months ago and shares top weight of 9st 10lb in the Chester Cup with Alan Bailey's Barbican.

The Jamie Osborne-trained Cesarewitch winner Never Can Tell and Mark Johnston's Gulf of Naples are among other leading contenders.

Shubaat, for Roger Varian, made the final field after the withdrawal of Zuider Zee.

Irish trainer Aidan O'Brien, who won the 2,000 and 1,000 Guineas at the weekend, saddles favourite Betterbetterbetter in the Cheshire Oaks.

Another of Rooney's horses, Tomway, is due to run at Chester this week, in the maiden stakes on Thursday.

Meanwhile stable star Brown Panther, who has been bred by co-owner Owen, makes his season debut in the Group Three Boodles Ormonde Stakes on Friday.

The Shirocco colt, who won at Royal Ascot last year and was second in the St Leger at Doncaster, will be ridden by six-time champion jockey Kieren Fallon.