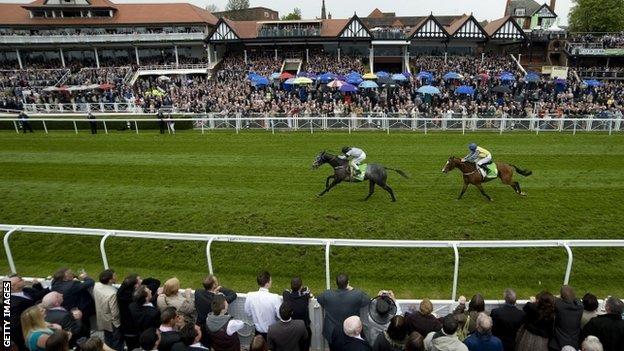 In his first race since leaving the Ian Williams yard, the 10-1 chance took the lead a furlong from home to win by a length and three-quarters.

Earlier, Wayne Rooney's first experience as a racehorse owner ended in disappointment when Pippy was last.

"As one seasoned racegoer said, 'welcome to the world of a racehorse owner, Wayne'."

The two-year-old colt - owned by the Manchester United and England footballer and his wife Coleen, both of whom were among the spectators - was always towards the rear after a slow start in the Manor House Stables Lily Agnes Stakes.

Rooney has another chance of success with Tomway in Thursday's five-furlong maiden.

Because of the soft conditions, the stalls were not used at the Roodee.

Overturn, winner of the Chester Cup last year, finished second to Rock on Ruby in the Champion Hurdle at Cheltenham in March but was carrying top weight on Wednesday.

McCain, who enjoyed his best National Hunt season with 153 winners, said: "Ian Williams deserves a lot of the credit for Ile De Re as he did a lot of the work and we've only had him a few weeks.

"It was a brave run from the old horse [Overturn] as well. I don't quite know how to feel as he's beaten everything bar the other one.

"I thought he'd win two furlongs out but the weight on that ground has taken its toll. We all have a huge affection for him in the yard because he's so tough.

"Overturn is in the Ascot Gold Cup as well as the Queen Alexandra and that race would suit him.

"We'd thought of the Northumberland Plate for Ile De Re but if he doesn't win another race for us, it doesn't matter.

"Flat racing is not the be-all-and-end-all for us but we are lucky to have some smashing horses that can do a job for us."