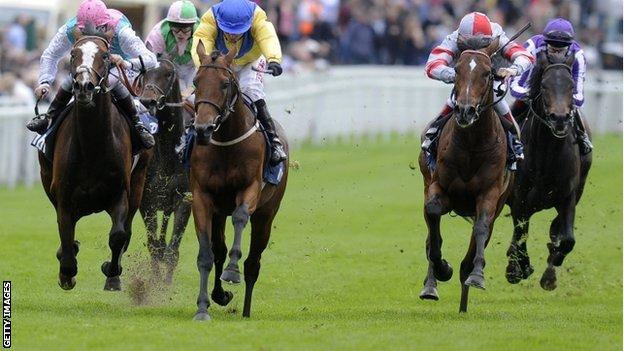 Jockey Tony Hamilton guided Mickdaam to a surprise Chester Vase win by a nose from Model Pupil in a photo finish.

Leading fancies David Livingston and Call To Battle disappointed in the five-runner race.

Owner Wayne Rooney had a loser for the second day running as his horse Tomway was seventh in the maiden stakes, won by stablemate Fat Gary.

Fahey said Mickdaam, who spent the winter in Dubai where he had four runs for South African trainer Mike de Kock, would be his first runner in the Derby.

The colt was second at Newmarket when he returned to action in the UK last month, and had no problems with the soft ground at Chester.

"I thought he handled the conditions very well. He'd only been back 12 days when he ran at Newmarket last month, so he was entitled to come on for that," said Fahey.

"It will be fantastic to run him in the Derby."

Model Pupil's trainer Charlie Hills said his horse would be aimed at the St Leger at Doncaster in the autumn.

Earlier, jockey Graham Lee had his biggest win since switching from jumps to the Flat on Absinthe (10-3) in the opening handicap for trainer Donald McCain.

And Lee completed a double on the Jim Goldie-trained Jack Dexter (9-2).