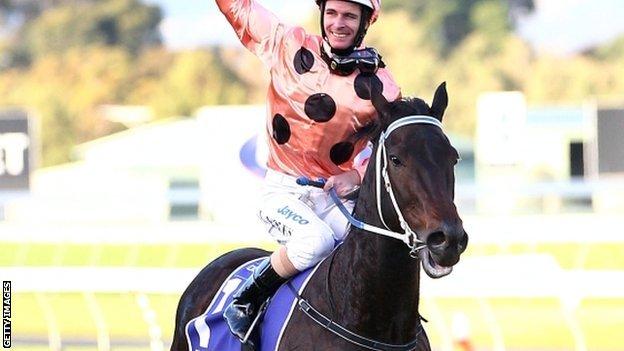 Australian sprinter Black Caviar stretched her record unbeaten run to 21 by winning the Group One Goodwood at Morphettville, Adelaide.

It was the five-year-old's final race before flying to England for June's Diamond Jubilee Stakes at Royal Ascot.

Jockey Luke Nolen, who eased the mare to victory by more than a length, said: "We were never out of second gear."

Earlier in the week, trainer Peter Moody rejected claims that Black Caviar had to prove herself at Royal Ascot.

When it was suggested to him that his mare had not beaten any major international horses in Australia, Moody replied: "You have never seen anything like this horse before.

"It would be an absolute tragedy if she went there [to Ascot] and got beaten by your B-grade sprinters for half the prize money and [travelling] three-quarters of the way around the world."

Moody also warned that he would not run Black Caviar if she was not 100% fit following her flight to England.

"If I take her all the way over there and she is not right I won't run her for the sake of running," he said.

Black Caviar has been installed as favourite by bookmakers for the race, ahead of local sprinters Bated Breath and Hoof It.

The mare could also run at Newmarket on 14 July in the July Cup, another leg of the Global Sprint Challenge.