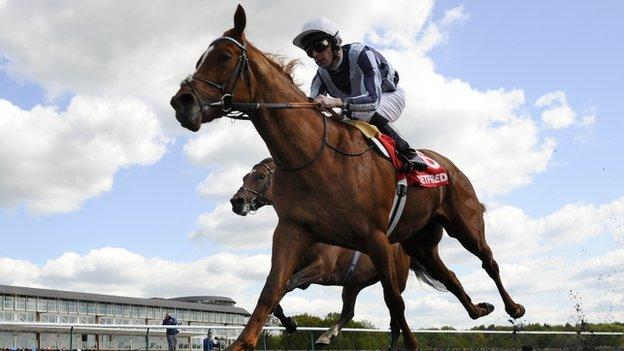 It was a fourth win in a row for the David Lanigan-trained three-year-old (3-1), ridden by Ted Durcan.

Shantaram (5-4) looked in good form when he came through on the inside but Main Sequence quickened up nicely.

Although Shantaram tried to chase him down, Main Sequence won by three-quarters of a length with Cavaleiro some way back in third.

Lanigan, a former assistant to Sir Henry Cecil, said afterwards: "We'll sit down with the horse's owners the Niarchos family and racing manager Alan Cooper and see how he comes out of it.

"There is a question mark on his breeding whether he will stay the Derby trip, but Ted said he galloped out to the line and when the other horse came to him he was just a little idle.

"The plan was if he won today and we were impressed we would do that [go to Epsom].

"I've been very, very lucky, the Niarchos family have supported me from day one and I'm very grateful for that."

Durcan has no fears about his mount getting a mile and a half and added: "He was really switched-off and settled. He found loads and will stay a mile and a half. He's a lovely horse and is hopefully on the way up. There's no reason to think he won't stay."

Main Sequence is now around a 20-1 chance for the Classic on 2 June. The betting is headed by the Aidan O'Brien-trained Camelot who won last weekend's 2,000 Guineas at Newmarket.