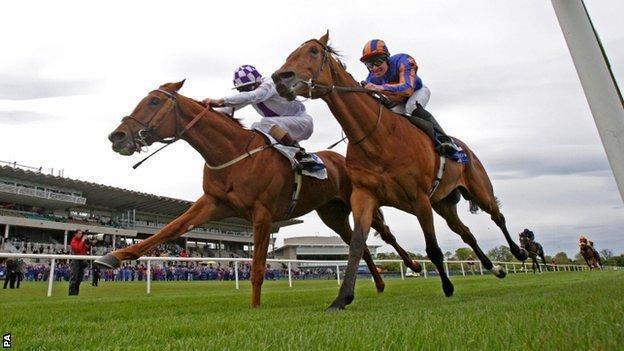 The colt beat Aidan O'Brien's Tower Rock into second while there was no luck for the other O'Brien runner Wrote, the 8-13 favourite.

Light Heavy, the winner of the Ballysax Stakes last time out, does not have an entry for the Epsom Classic.

It gave Bolger a first win in the race since 1993.

Light Heavy started to challenge two furlongs from home with Wrote struggling but he found Tower Rock a tougher prospect.

Despite not being the biggest, Light Heavy showed plenty of grit to win by a neck.

Another O'Brien horse Camelot, leads the betting for the Derby after last weekend's 2,000 Guineas win.

Light Heavy could be aimed at the Irish Derby on 30 June or the King George VII Stakes at Royal Ascot the previous week.

Meanwhile, at Longchamp, the O'Brien-trained Furners Green, who was due to run in the Derby, had to be put down after breaking a leg while finishing third in the the Poule d'Essai des Poulains, the French equivalent of the 2,000 Guineas.

O'Brien's jockey son Joseph was catapulted to the ground but avoided serious injury.