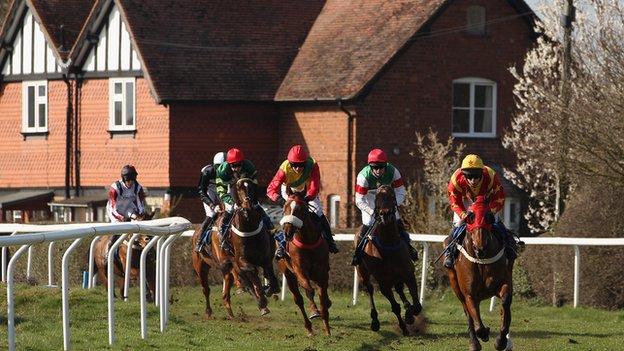 Champion jockey McCoy, already on top with 11 winners this time round, scored his first two at Ludlow on 29 April.

That was his first return to action in England following his Aintree fall on Gold Cup winner Synchronised.

And he looks to have a good chance with the Rebecca Curtis-trained Salomi.

He also rides Made In Time for the Curtis yard and will be in the saddle for two Nicky Henderson horses, as well as riding Rossmore Lad for Charlie Longsdon.

Jacob, winner at Aintree on Neptune Collonges a month ago, rides Round Tom for champion trainer Paul Nicholls in the third race of Ludlow's annual evening meeting, which is also the South Shropshire course's Ladies evening.

Jacob will be wearing the familiar Neptune Collonges colours of Shropshire owner John Hales in the concluding bumper where he partners Viscaflia, also trained by Nicholls.

The biggest field of the evening, 15 runners, are set to contest the feature race, the 3m Tanners Wine Handicap chase where the McCoy-ridden Made in Time is sure to be a warm order to make amends for his fall at Wincanton last time.

But the course's leading trainer Evan Williams saddles topweight Drumbaloo, who will find this trip much more to his liking than the 2m 4f over which he raced last time.

The seven-race card comes under orders for the first race at 1730 BST.