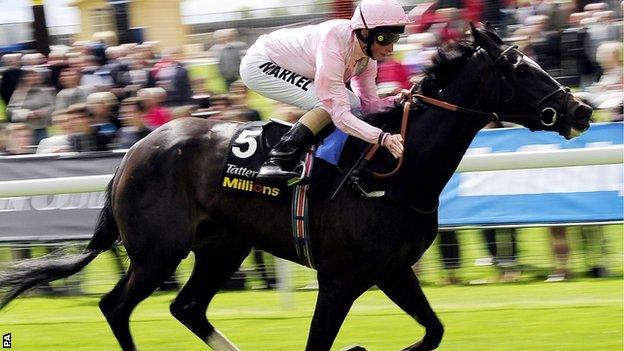 The Fugue, owned by Andrew Lloyd-Webber, passed her audition for next month's Epsom Oaks with a comfortable success over favourite Twirl in the Musidora Stakes at York.

She is now amongst the favourites for the fillies-only Classic staged the day before the Derby over the same course.

Trained by John Gosden and ridden by William Buick, she was having just the third start of her career.

She finished fourth at the 1000 Guineas 10 days earlier.

The Fugue was involved in a collision that day but the resulting injury was only superficial.

Aidan O'Brien's Twirl was the 5-6 favourite but finished four-and-a-half lengths behind The Fugue, who is now 7-2 favourite with one bookmaker (from 12-1) for the Classic.

"The better ground has made a big difference to her," said Gosden.

"She's a lovely filly and she was unlucky in the Guineas when she was struck into.

"All being well she'll run at Epsom now, but she wouldn't want it soft. In case it is, we'll also leave her in the French Oaks.

"I didn't like bringing her here just 10 days after the Guineas, but I felt we had to find out if she was good enough for Epsom."

Buick added: "She felt very good. She was a little bit keen early on and she's still inexperienced, so when horses come around her, she's a very reactive filly.

"I just tried to get her to settle and she picked up really well - she's class."