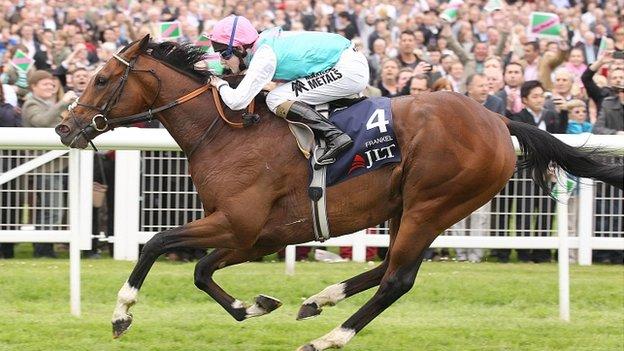 Frankel maintained his 100% record by storming to victory by five lengths in the JLT Lockinge Stakes at Newbury.

Dubawi Gold (16-1) was the best of the rest, a further four lengths back.

"He's not like anything I've sat on before or probably ever will again," said delighted jockey Tom Queally.

Frankel was already the world's highest-rated racehorse before Saturday's victory, having won all nine of his races, including six Group One outings.

He showed no signs of a leg injury sustained at Newmarket in April, when his racing career was in the balance.

"It's a great relief he's come back. He's grown up from last year, he's thicker set," added Queally. "If you look at him now, he's the real deal - he's filled out since last year."

Cecil, who paid tribute to the stable staff for bringing Frankel back to full health, said: "His first race is never his best but we had to bring him here as he needed a race before Ascot and he has done it very easily.

"He is stronger this year and Tom said his acceleration is incredible."

Bullet Train, Frankel's regular work partner and three-parts brother, shot out of the stalls, with Queally happy to sit in just two lengths behind.

Frankel then showed his class to take the front and easily put daylight between himself and the five other runners.

Excelebration's trainer Aidan O'Brien said: "Frankel is a great horse, isn't he? I'm delighted for everybody involved with him."