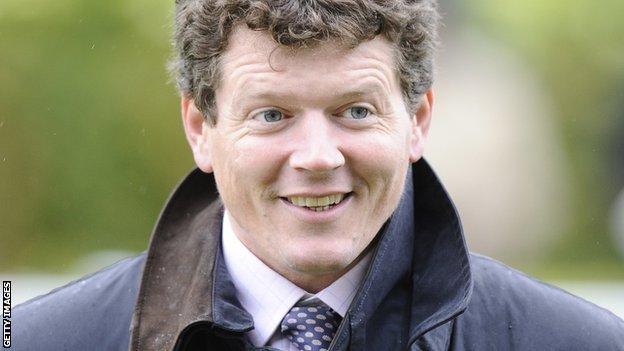 Bonfire enhanced his prospects for the Derby with victory in the Dante Stakes at York.

Making his seasonal debut, the Andrew Balding-trained colt got the better of Ektihaam to take this Group Two test and book his place at Epsom.

The 3-1 shot won by three quarters of a length. Fencing was third but never looked threatening.

Balding said: "It's key at Epsom to get a position and it looks like he's got the ability to do that."

The early pace was set by the Aidan O'Brien-trained Ernest Hemingway, but the stablemate of 2000 Guineas winner and hot Derby favourite Camelot weakened tamely in the straight.

He was a spent force as Bonfire ranged alongside him after they turned into the straight.

Bonfire performed decently with soft going in his two races last year, winning a Salisbury maiden and then coming third in a Group One at Saint-Cloud.

Jimmy Fortune had to bustle up the twice-raced Bonfire to go and win his race, which he did in determined fashion from a tough opponent in Ektihaam.

The first two pulled clear of Fencing, while Godolphin's Mandaean was a disappointment on his first run for Mahmood Al Zarooni.

Fortune said: "He travelled very well, he travelled like a good horse. He was probably in front long enough but he held on.

"We went a decent gallop, it was a truly run race. It was a good trial and it was as much as we wanted to do really.

"He's a playful little horse and he likes to do things his own way but he's very genuine."

Balding added: "It was very good. I was getting a bit uncomfortable with all the hype because he's not a brilliant work horse and he's done it in flashes this spring, so it was a relief to get him out.

"He behaved like a professional most of the time and he did it very well in the race. Jimmy was very impressed. It was a truly run race and a proper trial.

"The second has had a run already this season and Jimmy felt we were getting a little leg weary inside the final furlong, not through lack of stamina but through lack of race fitness so that is all the more encouraging."