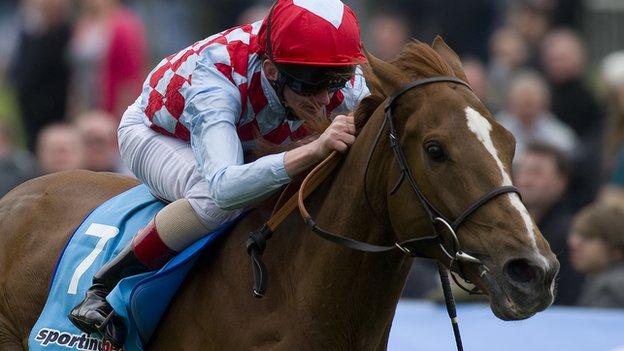 Last year's Melbourne Cup runner-up Red Cadeaux claimed his first win of the season in the Yorkshire Cup at York.

The 4-1 shot, trained by Ed Dunlop and with Tom McLaughlin on board, was never far from the lead and hit the front with a furlong to go.

Glen's Diamond (25-1) was second, with 9-4 favourite Harris Tweed, leader for much of the race, in third.

"It's a big day for the horse and the team. He's been a star for all of us and it's fantastic," said Dunlop.

"He's a gentle giant. He doesn't worry about life and he's improved phenomenally as he's got older.

"I'm very proud of the horse and the team and I'm particularly pleased for Tom as he's been a huge part of this horse's career."

McLaughlin added: "This is my biggest win on these shores. I've won the Winter Derby and I won the Curragh Cup, but it's great to win on a horse like him."