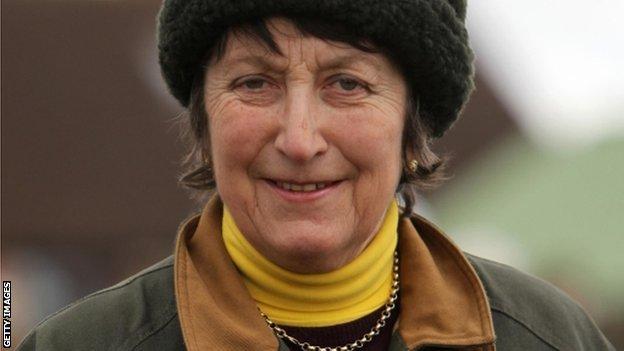 Henrietta Knight, trainer of three-time Cheltenham Gold Cup winner Best Mate and one of National Hunt racing's most prominent figures, is to retire.

The 65-year-old will continue looking after horses for footballer-turned-Flat-trainer Mick Channon, who lives nearby.

"Largely due to my husband Terry Biddlecombe's continued ill health, I have decided to hand in my licence," she said on her website.

"I would like to thank everybody who helped me enjoy so many happy days."

Knight added on 5 live: "It wasn't without a lot of thought and we took several months of deliberation but I think it's the right one."

Biddlecombe suffered a stroke last October and is struggling with arthritis.

"Terry's very lame," Knight told 5 live. "He broke 47 bones when he was riding in the 60s and the medical world was not quite what it is now - he can't drive or move around very well but he's full of enthusiasm and looking forward to what were going to be doing."

Cornelius LysaghtBBC horse racing correspondent
Time and patience have been Knight's watchwords since she sent out the first of 700-plus winners in 1989. Best Mate contributed 14 to the total with a series of famous successes

"Very sad that Henrietta Knight, trainer of Best Mate & Edredon Bleu, is retiring. I will be forever grateful to her for giving me some great days," he wrote on Twitter.

Knight sent out more than 700 winners from her Lockinge yard and insists she intends to stay involved with the sport.

"Mick [Channon] too enjoys the National Hunt scene and is already making his presence felt in that sphere with recent good winners from only a handful of National Hunt runners," she added.

"I hope that this change will mark the beginning of a new era and I am looking forward to continuing to handle the horses until they move to West Ilsley for their races.

"My gallop, schooling fences and loose jumping school will have plenty of use and other new projects are already in the pipeline. There are exciting days ahead."

Her days as a trainer will be best remembered for her involvement with Best Mate, who won three successive Gold Cups at Cheltenham between 2002 and 2004, matching the achievement of the great Arkle.

"That was easily the highlight of my career," Knight told 5 live. "The build-up was unbelievable, there was so much pressure. When it happened and he won it felt like a cloud had lifted. It was amazing."

Best Mate missed the 2005 race with a burst blood vessel and died in November that year at Exeter after suffering a suspected heart attack. His ashes were shattered on the Cheltenham course.