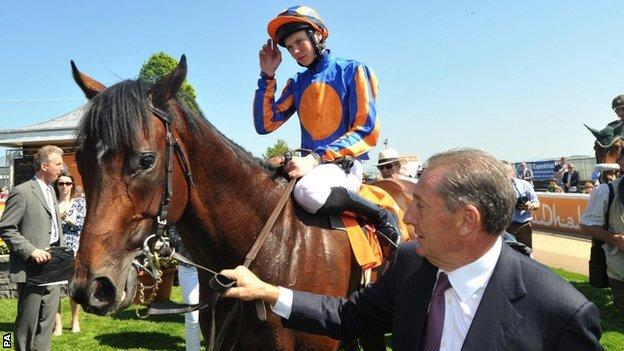 Power showed an impressive turn of pace in the final furlong to pip outsider Foxtrot Romeo (33-1) at the Curragh.

He's a classy horse and he has plenty of speed

Fellow O'Brien runners Reply (25-1) and Daddy Long Legs (7-1), who had made much of the running, came third and fourth respectively.

It was an eighth victory in the race for Aidan O'Brien, while his son also won aboard Roderic O'Connor last year.

The winning rider said: "They went a very good gallop and my horse was nice and relaxed. I was creeping away down the rail and I had plenty of cover.

"I didn't want to get to the front too soon and the lads were a long way in front. I wasn't sure if I was going to get to them but in fairness, he quickened up very well when I needed him.

"I have to thank Ryan Moore, he rode the horse at Newmarket and, in fairness, he said he felt like a good horse for the first part of the race and he just didn't come down the hill on the ground.

"He said that he thought this fella was the one so a big thanks to him. He's a classy horse and he has plenty of speed."

His father was thrilled to add to his wins in the English 1,000 and 2,000 Guineas earlier this month.

"I'm delighted, what can I say? I'm privileged and delighted," he said.

"Ryan was anxious that Joseph would ride him [out of the other Ballydoyle runners] and how right he was. I'm delighted it worked out so well."

It was a remarkable turnaround in fortunes for Power, who finished second-last at Newmarket, well adrift of winner Camelot.

The much-fancied Jim Bolger-trained Parish Hall was withdrawn just hours before the race because of a leg infection and will also miss the Derby at Epsom next month.

It was also a disappointing afternoon for 5-2 favourite Trumpet Major, with Richard Hannon's colt failing to justify market confidence, coming in towards the rear.

Born To Sea, John Oxx's half-brother to Sea The Stars, raced at the back of the field before making up some late ground to come in fifth.