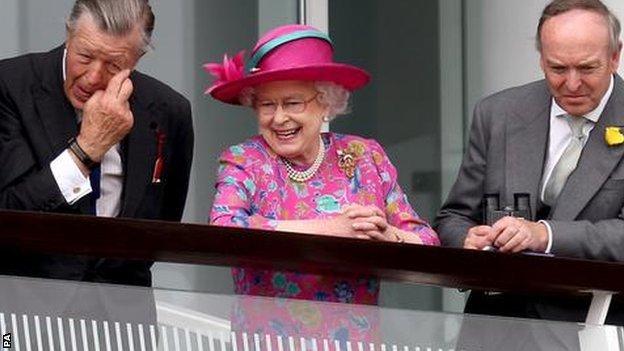 The 86-year-old, who is an experienced racehorse breeder, will begin her Diamond Jubilee celebrations on Saturday with her regular visit to Epsom for the Derby.

The Queen thinks about [racing] every day of her life. She will have the Racing Post brought to her.

"She would make a wondeful racehorse trainer because she's got the wonderful attribute of not hitting a down when there are issues," Warren said.

"She keeps her mind on a level plain."

The Queen has been breeding horses for 60 years and was close to winning the Derby in Coronation year, when Aureole finished runner-up.

Last year, Carlton House was the pre-race favourite for the Classic, but the three-year-old finished third behind eventual winner Pour Moi.

"There was a lot of hype and anticipation which started in spring of 2011," continued Warren.

"Carlton House's rhythm was impeded and it just ran out of puff at the crucial time when Pour Moi was cranking into gear.

"The only thing the Queen said, staring at the television with her hands behind her back, was 'I think he's just too far back'.

"Most in the racing business in the royal box were disappointed, but the family were thrilled to have a horse involved in the shake-up.

Warren added: "The Queen thinks about [racing] every day of her life. She will have the Racing Post brought to her and she misses very little.

"There are very few people alive that have bred as many crops. She's extremely knowledgeable and has a phenomenal memory.

"To kick off the Jubilee weekend with the Derby would be a tremendous boost and something the country can relate to so well because it's a wonderful event."