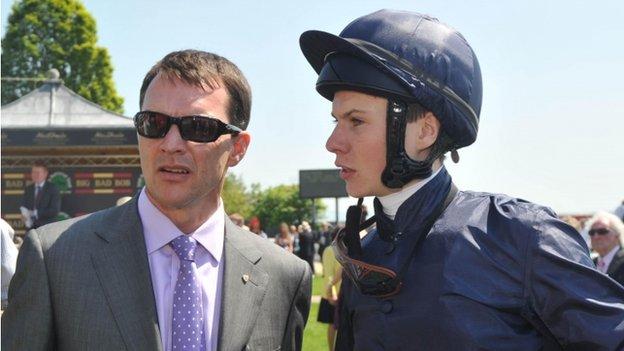 There can rarely have been a more important race for Aidan O'Brien than this year's £1.325m Epsom Derby.

As 'special horse' Camelot takes his next step on the path to potential superstardom, O'Brien looks to smash what's in danger of becoming a hoodoo in the Epsom Classic.

Amazingly, it's a decade - and 39 losers - since the trophy last went to his powerful Ballydoyle, County Tipperary base, when High Chaparral completed back-to-back wins for the stable after Galileo (2001).

To add extra spice the Coolmore racing empire's trainer will be legging up as the jockey on board Camelot none other than his teenage son Joseph.

Aidan O'Brien at the Derby

Little wonder when asked about the combination winning what would be a 48th European Classic race for O'Brien and his team, the trainer smiles his trademark nervous smile.

"It's one of those things: we haven't won the Epsom Derby in a lot of years, and we're very used to coming home very humbled.

"These horses are bred and reared to turn up in the Derby which is the race that distinguishes the breed and the different pedigrees but we can only try to do our best."

Joseph O'Brien, just 19, and the oldest of four children, has spectacularly come of age as a jockey over the last 12 months.

He earned good reviews for his handling of St Nicholas Abbey, himself the leading contender for the Coronation Cup on Derby Day, when successful in November's Breeders' Cup Turf race in Kentucky.

But those notices turned to rave for the finely-judged ride on Camelot to come from virtually last to first - his idea- in the 2,000 Guineas at Newmarket, setting up the colt's Epsom challenge.

Tall for a jockey, at a fraction over six feet, O'Brien junior sounds wise beyond his years when asked about big-race nerves.

"Obviously when you are doing your best, there's no point getting too worried about it," he said.

"When you know the horses you are riding, you have a pretty much a straightforward enough plan in your mind, and you can be happy."

In contrast, his father has admitted to "horrendous" anxiety ahead of the major occasions, but when it comes to his jockey son, he is simply a proud Dad.

Joseph O'Brien at the Derby

First checking that Joseph isn't within earshot, he said: "I suppose what a lot of people don't understand with Joseph is that from the time he's been able to walk, he's been in the middle of it.

"Before he was riding out, he was in the back of the jeep watching all the work [on the gallops] so this is what he's always known, and it's natural to him."

Conceding that for a teenager, his son has demonstrated considerable maturity particularly with his 2,000 Guineas tactics on Camelot, O'Brien went on: "I had a lot of question marks but I'm glad I didn't produce any of them [aloud]. I knew that no matter how much I thought about it, Joseph was after thinking about it more."

It is believed that no father-son trainer-jockey combination has ever won the Derby; success for Camelot, therefore, would ensure a unique place in history.

And not just that: if extending his unbeaten record to four from four at Epsom, the next stop is likely to be a tilt at Flat racing's Triple Crown - not won since 1970 - in the final Classic, the St Leger.