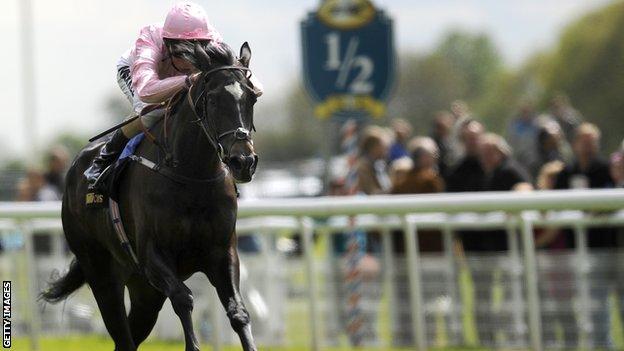 The Fugue, owned by Andrew Lloyd-Webber, suffered her only defeat in three outings at the 1,000 Guineas at the beginning of the month.

The three-year-old was too easily bullied out of position on that occasion, something Gosden is wary of.

Maybe vs The Fugue

"If she gets a clear run she'll run a huge race," the Newmarket handler told BBC Radio Cambridgeshire.

"But she's not very experienced so it will have to go smoothly for her and you can't always organise that."

The Fugue had led the early betting following but O'Brien's Maybe now heads the 14-strong field.

Gosden, who saddles Thought Worthy in will need jockey William Buick to overcome a troublesome draw at two.

"We're hopeful of a big race. It can get a little rough in the Oaks with that number of runners, so we hope we don't get knocked around again," he said.

"She has a very smooth, easy action. As long as it isn't too soft, she'll like the ground, she floats over it.

"It's not a great draw. You do have to go forward more and hold your position which means you can use a bit.

"But I'll leave it up to the jockey. With top class jockeys you don't interfere."

"I think the Oaks is very competitive," he said.

"I think Vow was very impressive at Lingfield. William has only had two runners at Epsom and they've both won - so he knows the time of day when it comes to getting one there.

"I'd love to see her win. But the Fugue has a chance. She won at York. But personally I'll be rooting for Vow."