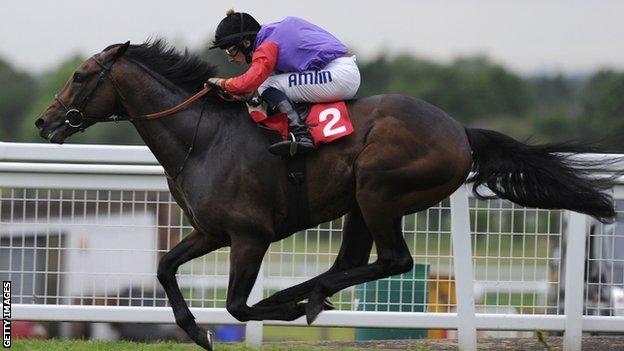 Carlton House, owned by the Queen, has made a winning return to the track with victory in the Brigadier Gerard Stakes on the eve of Diamond Jubilee weekend.

The 10-11 favourite was third in last year's Derby before finishing fourth in his last run in the 2011 Irish Derby.

"That was only his sixth race so you'd like to think he'll keep on improving," said jockey Ryan Moore after a comfortable victory at Sandown.

He got the gap and went through it, he always tries his hardest

Carlton House, who was favourite for last year's Derby, took a while to get going as I'm A Dreamer came through to lead two furlongs out, closely followed by Hunter's Light.

But as the field swept into the final furlong, the Queen's horse found a gap between the two leaders and pushed on to win by a length and three-quarters.

Moore added: "I was very happy with him. He was fresh early but they weren't going quick.

"He got the gap and went through it. He always tries his hardest."

Trainer Sir Michael Stoute said: "I didn't feel too much pressure coming into this evening. I came here hopeful.

"They weren't serious problems last year, but they were enough to prevent him from racing.

"It was pretty hard to prepare him for a Derby when his foot was in an ice bucket morning, noon and night.

"He was very fresh today. When he went through the gap he filled up again as it wasn't a strong gallop.

"We'll go for the Prince of Wales's [at Royal Ascot] next and take it one step at a time."