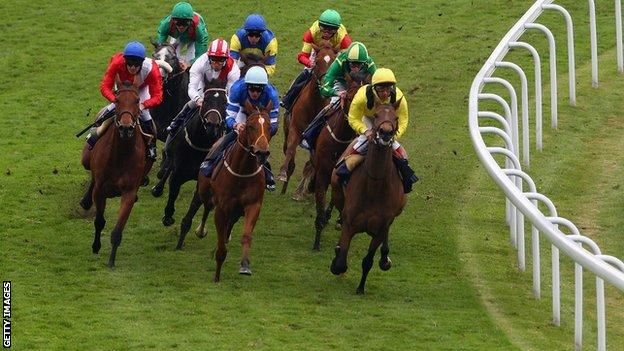 Derby Day may be a very British affair as Saturday marks the start of the Queen's Diamond Jubilee celebrations, but Irish trainer Aidan O'Brien has the strongest claims in the race.

I find it hard to get away from his favourite Camelot, who looks made for this unique test. Stablemate Astrology impressed last time, while Thought Worthy should be staying on at the end.

Son of 2001 Derby winner Galileo, stepped up on last season's performances when running out a ready winner of the Dee Stakes at Chester in May. Relished the soft conditions, and while it will prove a bit quicker at Epsom, he has won on good ground before. Has three-time champion jockey on board and been well supported in days before the race.

Confirmed as a major contender when landing the Dante Stakes at York, one of the key Derby trials. Trainer won the Epsom fillies' Classic, the Oaks, with Casual Look in 2003. He is the brother of BBC racing presenter Clare Balding and trying to follow their father Ian who landed the famous race with Mill Reef in 1971. Bonfire can be exuberant and will need to settle in front of a 100,000-plus crowd.

Unbeaten record includes autumn win last season in the Racing Post Trophy at Doncaster. Returned by winning the 2,000 Guineas with a late charge that suggested the further half-mile here would suit. Trainer and 19-year-old jockey bidding to be first father-son combination to win the big race. Odds-on shots don't always oblige, but this one should see off the smallest Derby field since 1907.

Debut in the race for jockey, who is only the second woman to ride in the Derby. She has won two Group One races previously and will be hoping to fare better than the previous lady rider, Alex Greaves, who finished last in 1996. Cavaleiro's price has shortened markedly during the week. Won at Newbury in September, but was a well-beaten third to Main Sequence in the Lingfield Derby Trial.

Unbeaten in four races and looks one of the more interesting hopefuls. The first Derby runner for his trainer, whose wife is expecting their second child a few days after the big race. Horse has tended to flash his tail in the closing stages, but hasn't stopped him winning and did well to overcome trouble in running, when blocked in, to land the Lingfield Derby Trial.

Clung on to win the Chester Vase by a nose to confirm his place as respected northern trainer's first Derby runner. Had previously been a decent second at Newmarket after four runs in Dubai, but more is needed here. The most experienced challenger, having his 10th run since July of last year. Rider has been champion jockey for the last two seasons.

Grew up as a foal in the same four-horse Berkshire paddock as leading contenders Camelot and Bonfire. Scored a heard-earned victory at Newbury in April, but was well beaten into last of five behind Mickdaam in the Chester Vase. Trainer has higher hopes for stablemate Bonfire. Former champion jockey, who has yet to win the Derby, takes the ride.

Form so far does not readily earmark him as a Derby winner. And trainer, who saddled Master Willie to finish runner-up to Henbit in the 1980 Derby, has admitted his runner has not done much to indicate he will finish in first three. Clocked up one win, at York in August, although only able to finish third to Thought Worthy on seasonal return at Newmarket.

Odds dropped significantly midweek when shrewd trainer, who won the 1997 Derby with Benny The Dip, thought it worthy to mention that the horse would appreciate the step up in distance. Battled to reclaim lead and gain victory at Newmarket last time out. A brother to the trainer's 2007 St Leger victor Lucarno, stamina looks a strong point.