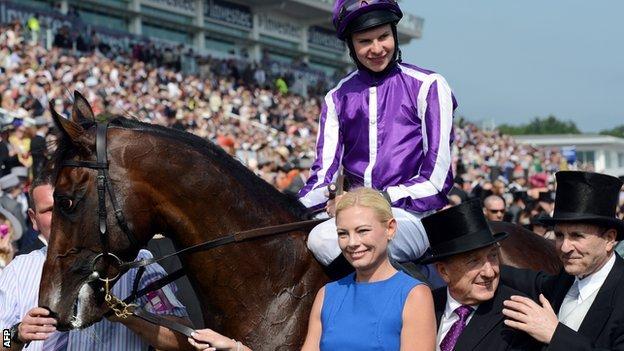 It was a day for Her Majesty, and the Epsom Derby winner Camelot produced a majestic performance to match.

The racecourse was a riot of red, white and blue as the Queen started her Diamond Jubilee celebrations, but this was a triumph for a racing family from Ireland.

Trainer Aidan O'Brien won his fourth English Classic out of four this season, and had the unparalleled thrill of seeing his 19-year-old son Joseph on board.

It was the first time in 233 runnings of the famous race that a father/son, trainer/jockey combination had triumphed.

"This is bigger than dreams, I couldn't imagine this would happen. I'm not educated enough to have words to describe it," said the 42-year-old Irish trainer.

Whatever his education, he is well schooled in how to look after racehorses and now has his eyes set on a clean sweep of the five Classics by aiming Camelot at the St Leger in Doncaster where victory would seal the Triple Crown.

No horse has won the Guineas, Derby, Leger treble since Nijinsky in 1970. He was trained at the same Ballydoyle yard in County Tipperary by the legendary Vincent O'Brien, who was no relation but had the same winning mentality.

The Queen paid a private visit to the stable when she was in Ireland last year and must have been impressed as she watched at Epsom from the Royal Box.

In only his second Derby appearance, just 10 days after his 19th birthday, Joseph produced a nerveless ride before a crowd of 130,000 on the 8-13 favourite.

He patiently bided his time over the undulating one-and-half mile trip before hitting the front and powering clear for a five-length victory from Main Sequence and the winner's stablemate Astrology.

"When you are on a short-priced favourite for the Derby, there is always pressure, but the thing was to get him to relax and into a rhythm," he said.

"This is a dream come true and to win the Derby on a horse like Camelot is very special. He has never disappointed and long may it last."

The baby-faced tactician has already drawn comparisons with nine-time Derby winner Lester Piggott. At around 6ft, he is tall for a jockey and some fear his weight could potentially limit his longevity in the saddle.

"He's got a lot of self-confidence and reminds me of Lester. He's sitting on the right horses, and that's what Lester always did," said Willie Carson, who won the Derby four times.

"If he wasn't related, he possibly wouldn't have got the start he did, but he got the chance and produced the goods. This kid has won at the Breeders' Cup and has won Classics."

The O'Briens clocked up two Group One wins on Derby Day, with St Nicholas Abbey sealing back-to-back victories in the Coronation Cup.

After Joseph's victory at the Breeders' Cup Turf on St Nicholas Abbey in November, former top American jockey Jerry Bailey described his riding style as being like "a lizard on a log".

When asked, Joseph claimed not to know his exact height and said he would "play it by ear" when thinking about his future.

"It is going to be a difficult task for him to hold his weight, but let him enjoy it while he can," former jockey Mick Kinane, a triple Derby winner, said.

"He has a very good racing brain, he is tactically well aware. He's riding the right horses and he's doing very well. His head is screwed on and takes the big occasion well in his stride."

Owner Derrick Smith, whose purple and white colours were carried by Camelot, was celebrating the 100th Group One winner in which he had been involved, and saluted the horse.

"He's got speed, stamina and a great physique - he's just the real deal," said the former bookmaker, who is one of the powerful Coolmore team alongside John Magnier and Michael Tabor.

"I would think he would go for the Triple Crown, but we will have to talk about it. It's a high-class problem to have."

In legend, Camelot is the castle and court of King Arthur. At Epsom, unbeaten Camelot was not quite the stuff of legend but he could go on to be.

He is the fourth Derby winner in the last eight years to be sired by the stallion Montjeu, who died earlier this year.

As Aidan has shown with his son Joseph, it is all in the breeding.