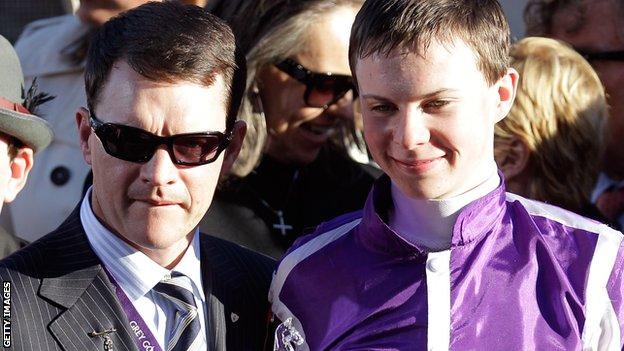 Trainer Aidan O'Brien and son Joseph missed out on a Derby double after Imperial Monarch finished outside the places at the French Derby.

On Saturday, Joseph rode Camelot, trained by his father, to victory in the Derby at Epsom.

However, in Sunday's race in Chantilly the pair were beaten by Saonais, trained by J-P Gauvin and ridden by Antoine Hamelin.

Saint Baudolino was second, ahead of a third French-trained horse Nutello.

British and Irish riders failed to make an impression at the Prix du Jockey Club, with Paul Hanagan on the Roger Varian-trained Ektihaam, and Kieren Fallon on Most Improved, from the Brian Meehan stable, encountering traffic problems.

John Gosden's Gregorian, ridden by William Buick, was stuck wide throughout and was well beaten, while the highly fancied French Fifteen, second to Camelot in the 2000 Guineas at Newmarket, also found himself behind a wall of horses on the straight.