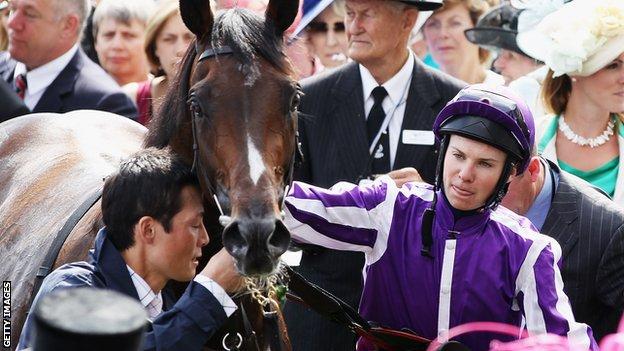 It's as certain as anything can be in sport that Camelot will attempt to land Flat racing's Classic Triple Crown by adding the St Leger to his CV at Doncaster in September.

The iconic treble of Newmarket's 2,000 Guineas, the Derby at Epsom and the St Leger has not been completed by a colt since the brilliant Nijinsky galloped off with it in 1970, and the last before him was Bahram in 1935.

The Sir Henry Cecil-trained Oh So Sharp landed the less-acclaimed fillies version - the 1,000 Guineas, the Epsom Oaks and St Leger - in 1985.

Historically, the idea was to show versatile brilliance all year, at one mile in the spring-time Guineas and a mile and a half at Epsom in June, before coping with a quarter-mile more in the autumn at Doncaster.

However, the subsequent defeat of Nijinsky in the Prix de l'Arc de Triomphe heralded a decline in the popularity of the final of Britain's five Classic races.

Thoroughbred breeders turned to stallions proven over shorter - speedier - distances, fearing offspring that would be stamina-laden but slow-coaches.

And a growing calendar offered all kinds of alternatives to "the Leger", the oldest of Flat racing's long-standing showpiece prizes, having first been staged in 1776, four years before the Derby.

The difference this time is the owners of the Aidan O'Brien-trained Camelot.

John Magnier, Michael Tabor and Derrick Smith, the triumvirate that make up the Irish based Coolmore racing empire, have won practically everything worth winning - everything, that is, except the Triple Crown.

With top stallion prospects coming out of their ears, they can afford the commercial risk of going for what would be a huge slice of Flat racing history.

Anyway, were Camelot to start his stud career as winner of the "unfashionable" St Leger, he'd still also be a Guineas and Derby winner, plus a son of the brilliant, recently deceased stallion Montjeu.

Plus, with Camelot head and shoulders above the rest of this year's three-year-olds - although clearly some will blossom over the next three months - the Coolmore partners believe it's a no-brainer. He's long odds-on to win.

Although nothing's official, my understanding is that Camelot - officially rated the equal of the outstanding 2009 Derby winner Sea The Stars after Epsom - will now be rested until Doncaster.

Such is the strength of the Aidan O'Brien/Coolmore team, winners of all four of the 2012 British Classics to date, that they will have plenty of alternative candidates for the kind of races Camelot might otherwise have contested.

Many will regret his absence during the high summer programme, but with memories tested to recall 1970, that disappointment will surely soon evaporate if history is made on 15 September.

And early indications are that, all being well, he'll be back in 2013 when a target of the Prix de l'Arc de Triomphe will top the agenda.