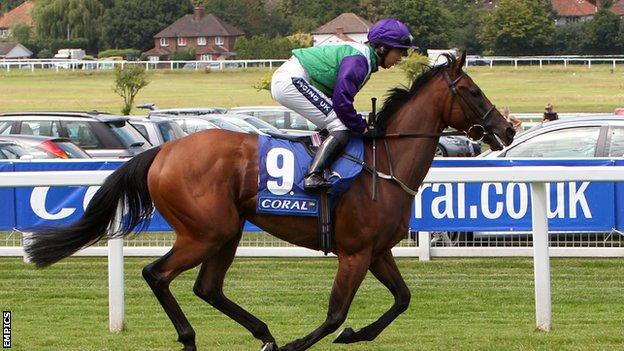 Michael Bell will use next week's King's Stand Stakes at Royal Ascot to prime Margot Did for a tilt at back-to-back Nunthorpe Stakes victories.

The four-year-old fared well in a pair of outings in Dubai in March, finishing in the midfield over five furlongs.

But her latest run was a disappointing last place at Newmarket in May.

"I want to see her hit some form again and then we can have a campaign built around the Nunthorpe," trainer Bell told BBC Radio Cambridgeshire.

The Newmarket handler has been unable to pinpoint the reason for Margot Did's failure at Headquarters, especially considering her .

But after a series of tests he is happy with her condition ahead of next week's King's Stand Stakes.

"She was fine. We took a few blood tests and scoped her and she came out all clear," he said.

"You turn the next page. If you keep looking backwards you never go forwards. With sprinters there's such fine margins, if they miss the break or one thing or another.

"It looks a very tough race with a whole load of foreigners coming over to take us on in our home patch.

"But she likes the track there at Ascot, has run well there on several occasions. I think she'll run very well but it's tough to say she'll beat all of them.

"We'll get her back on track."

Bell will make a late decision on where to enter steady earner Wigmore Hall, who has been earmarked for either the Prince of Wales's or the Hardwicke Stakes.

Since the turn of the century we've actually had a good time. I love the meeting. It's the showpiece week for British racing. One win there is worth 10 I'd say

"We'll look at both races and decide which nearer the time. He's in good form," he said.

"I'd prefer to run in the Prince of Wales but it depends how strong it is. If a whole load of horses with a handicap rating of 125 show up we may duck it and go for the Hardwicke.

"He's a genuine 115 to 120 rated horse and he's a lovely horse to have about the place. He's one of the top earners in the country, winning over £1m, so he's nice to have about."

And Bell hopes a rich vein of form at the Royal Ascot meeting, which has seen him return a strike rate of 14% over the last five years, can continue in 2012.

"We've had a good run there recently. It took me ages to get off the mark there," he said.

"But since the turn of the century we've actually had a good time. I love the meeting. It's the showpiece week for British racing. One win there is worth 10 I'd say."