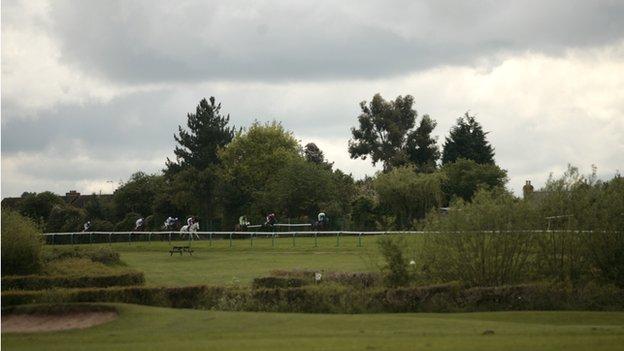 Hereford racecourse officials say their ability to produce good going despite the bad weather has been reflected in entries for Thursday's evening meeting.

"A lot of the jump meetings have run on soft or heavy because of the major downpours," clerk of the course Keith Otteson told BBC Hereford & Worcester.

"But, although we've had rain here the track is draining really well.

"In early spring we raced generally in wet conditions but it's come back great. The ground is generally good."

"We have had so much rain and with the soil warming up it has been almost perfect growing conditions.

Eighty five horses have been declared for the seven-race card and Otteson admits it is more than they might normally expect for the time of year, with trainers having delayed turning out horses for their summer break because they have been unable to run them on suitable going.

"The fields tend to get a bit smaller as the summer goes on," adds Otteson.

"The horses that are in training at the moment would be expected to run on quicker ground in normal summer conditions.

"But over the last couple of weeks they just haven't been able to get that because of the unseasonably wet weather throughout the country.

"We have had so much rain and with the soil warming up it has been almost perfect growing conditions.

"Head groundsman John Glover and his team have been doing a great job and all credit to them that the track is looking so well."