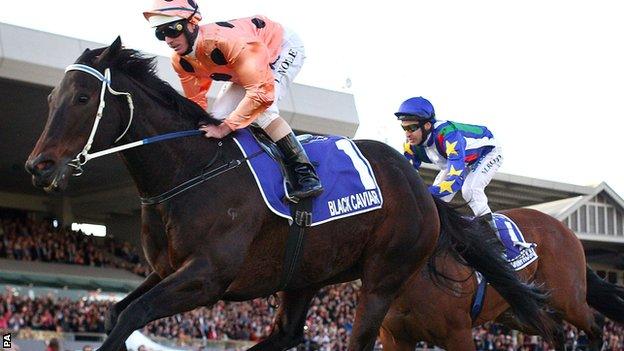 The team behind Black Caviar say the mare has "nothing left to prove" when she races at Ascot next weekend.

The unbeaten 21-time winner made the trip from Australia in a specially-made body compression suit.

She will race outside Australia for the first time on 23 June in the Diamond Jubilee Stakes.

"There's nothing for her to add to on top of her record - we know she's a champion," said Jeff O'Connor, racing manager for trainer Peter Moody.

"I pretty much believe there isn't a horse that can beat her but anything can happen on any given day in racing - horses get beat and jockeys fall off," he added.

"Something going wrong out of our control is our biggest scare, and I don't really want to deal with that but if it happens we will have to.

Black Caviar will face stiff opposition in next Saturday's race from a field including Bated Breath, Moonlight Cloud and Society Rock.

"We know we are closer to the end than the beginning of Black Caviar's racing career and she is rising six in southern hemisphere time," added O'Connor.

"There is nothing left for her to achieve as a racehorse and she might tell us one day that she wants a bit of peace and quiet.

"At the moment she loves the camera and enjoys being a racehorse, but one day she might just turn up and say I have had enough - that will be a tough time."