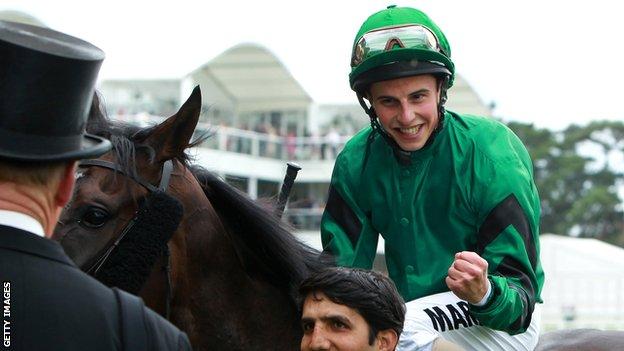 The feeling that William Buick is now the crown prince among top jockeys is further underlined by his booking to ride the John Oxx-trained Akeed Mofeed in the Irish Derby.

The colt is one of six rivals attempting to end Epsom Derby winner Camelot's unbeaten record of four wins from four starts.

Buick, narrowly beaten in the race to be top jockey at Royal Ascot, takes the place of Akeed Mofeed's regular rider Johnny Murtagh, who is on the Oxx stable's other big race hopeful, Born To Sea.

Although it is a busy weekend, the fact that it is the 23-year-old rising star that the famously shrewd Oxx has called upon for such an important mount has to be seen as significant.

Increasingly, it is looking a case of when rather than if Buick, number one rider to trainer John Gosden's powerful Newmarket-based string, is king of the Flat jockeys as champion.

Clearly, there is a long way to go until the season's end in November, but half-British, half-Norwegian Buick is lying second in the table, with the leader, Ryan Moore, well within his sights.

Asked about the title race, the 2008 champion apprentice (jointly with David Probert) demonstrates his level-headed, modest reputation to a tee. He said: "I'm riding as much as I can, as many winners as I can and trying my best. We'll see where we end up.

"I'm 23, still learning about the game - there's a natural progression, you know."

At any 'normal' Royal Ascot, Buick's five successes, including a sparkling treble with Gosden on the fourth day, would have made headline news.

However, such was the quality of the 2012 Royal meeting that the achievement got rather lost amid the torrent of quality news stories surrounding Frankel, Black Caviar, the Queen and so on.

But seasoned observers were particularly impressed both with Buick's versatile skills in the saddle and his calmness under pressure at the biggest race meeting of the year.

The son of jockey Walter Buick, Buick junior cut his teeth under the watchful tutelage of now-retired trainer Ian Balding at Kingsclere, Berkshire.

So impressed was Balding, who has mentored a string of ultimately top riders, that when his protégé was a complete unknown, he struck a bet of £10 at odds of 500-1 that he'd one day be champion.

He may not be too long in collecting his winnings.

It's only a small field for the first Irish Derby to be staged on a Saturday evening, but with Camelot facing highly-rated rivals Imperial Monarch and Speaking Of Which, as well as Akeed Mofeed and Born To Sea, it's not lacking in quality.