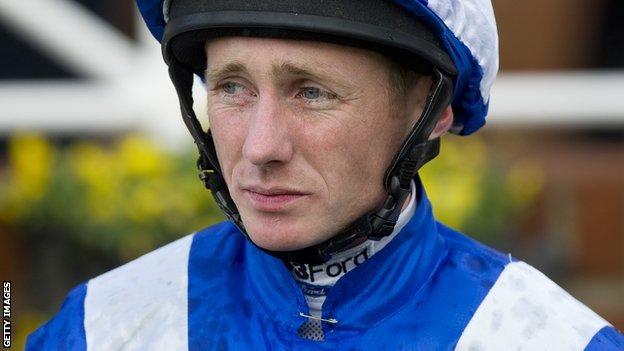 Paul Hanagan could be back in action by the end of the week despite a nasty fall in the Tattersalls Millions 3-Y-0 Cup at Newmarket.

The dual champion jockey fell from No Dominion when the horse clipped heels with Richard Hughes-ridden Viewpoint.

He was taken to a Cambridge hospital for X-rays on his arm and leg, but both came back clear and revealed only severe bruising.

It was initially suspected that the 31-year-old had broken his elbow.

Hanagan's agent Richard Hale said: "I haven't bothered him this morning, but I'd imagine he's pretty stiff and sore.

"His X-rays came back OK and he's aiming to be back on either Friday or Saturday, but we'll just have to take it day by day.

"The fall was unlucky in the first place, but I suppose he is lucky because it could have been a lot worse."

Newmarket's director of racing Michael Prosser said: "We have to praise the medical staff for their quick attention."

The John Gosden-trained Michelangelo won the race from Cameron Highland.