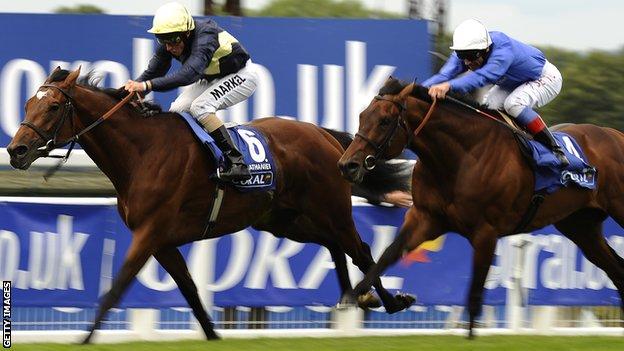 Nathaniel won a thrilling Coral-Eclipse at Sandown by half a length on his first run of the year.

It was an impressive ride by William Buick as he held off a strong challenge from favourite Farhh with 2010 winner Twice Over finishing third.

Trained by John Gosden, last season's King George winner Nathaniel hit the front with three furlongs to go and powered home to hold on to victory.

"He's got real quality and he showed what a good horse he is," said Buick.

Farhh, ridden by Frankie Dettori, made a good break from the stalls after having problems in the Prince of Wales's Stakes.

The Godolphin runner was tucked in at the back of the field before making a charge but Nathaniel produced a stunning performance to secure victory.

"I have to say that was a fantastic training performance from John Gosden," added Buick.

"To get the horse here in the shape he was in, all credit to John.

"He showed his versatility today and all being well he'll go for the King George again."