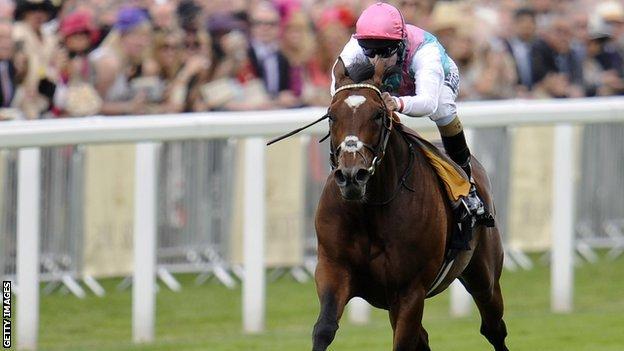 Glorious Goodwood organisers are hoping to draw good crowds despite the festival competing with the Olympics.

Gaining any form of profile during the 17 days of the Olympics is sure to be as tough as the final loops of Box Hill in the men's cycling road race.

But with an audience that is loyal to the picturesque racecourse, the festival shouldn't lose out too much.

"We can't be sure until the meeting actually happens.

"It's also to our advantage that we'll have been going for three days before the athletics start, and of course, we have a very special day on the Wednesday."

If successful in the defence of his title in the festival's feature, the Qipco Sussex Stakes, it will mean a remarkable 12 wins from 12 career starts for owner Prince Khalid Abdullah's colt.

Afterwards, 10-time champion trainer Cecil, normally as reticent as he is iconic within the sport, declared the horse the best that he'd seen, let alone trained.

A prediction that as a four-year-old in 2012, he might be even better was apparently borne out by a scintillating success at Royal Ascot in June.

Goodwood's one-mile, Group One highlight could well be the third-last race of Frankel's career before stud duties beckon, and it is expected to be his final race over a mile.

His odds may be as skinny as 20-1 on - if successful, a £1 return for every £20 invested - so likely to attract only the needy and the greedy, but tickets to watch have been selling fast.

However, while a bumper crowd is promised, Frankel will face no more than seven opponents, headed by Eclipse Stakes runner-up Farhh from Sheikh Mohammed's Godolphin stable.

Barring something extraordinary, there won't be any problems.

And Hughes' talented mount Olympic Glory is likely to be a well-named winner whether his target race ends up being one on the Wednesday or the Thursday.