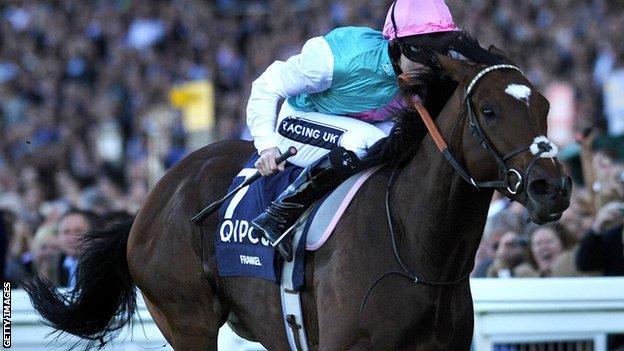 The world's top-rated racehorse, Frankel, extended his unbeaten run to 12 by demolishing the field in the Sussex Stakes at Glorious Goodwood.

A capacity crowd of 25,000 saw history unfold as Frankel was never troubled over the mile, emerging the winner by five lengths.

Jockey Tom Queally cruised his mount past the finishing post to claim the £300,000 prize for the winner.

Frankel will now make the step up to 10 furlongs at York in 21 days' time.

At 1-20 prior to the start, there was great expectation in the sunshine that Frankel, owned by Prince Khalid Abdullah and trained by Sir Henry Cecil, would once again deliver on this course.

"He is the best horse in the world, perhaps the greatest racehorse that British racing, even world racing, has ever seen. Frankel won it and made it 12 out of 12 at Glorious Goodwood. It was absolutely magnificent, almost disdainful. Today is Frankel Day."

A winner by five lengths in last year's Sussex Stakes, opposition this time around came mainly in the form of second-favourite Farhh at 12-1, while Frankel's pace-setting half-brother Bullet Train and Gabrial were distant in the odds.

Frankel was last into the starting gate but once out made short work of leading the four-horse field.

Farhh, as expected, proved the sternest test for Queally and his colt and produced a burst of speed at halfway to challenge the leader.

But Frankel was having none of it and in the final two furlongs clinically and comprehensively extended his lead as he powered to the line.

As the finish approached jockey Queally looked over his right shoulder to gauge the distance of the field. He need not have worried - Frankel had it sewn up almost from the off.

Frankel, who has never been beaten, becomes the second colt in history to win seven Group One races in consecutive starts, equalling Rock of Gibraltar's 2002 record.

His move to a longer distance at the Juddmonte International Stakes at York on 22 August could signal his exit from the eight furlongs stage.