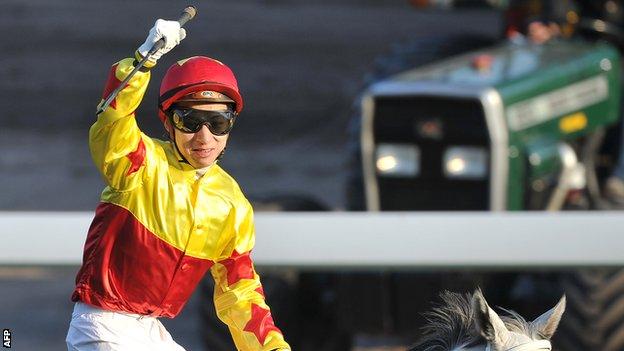 The Rest of the World team, led by Japanese rider Yutaka Take, won the 12th Shergar Cup before a crowd of more than 30,000 at Ascot.

China's Matthew Chadwick secured three second places and a victory in the last to win the individual prize and help his team to 89 points.

Frankie Dettori's best was third but his Europe team were second on 56.

Hayley Turner's all-female team were a point further back, with Keiren Fallon's GB and Ireland last on 46.

Under the present format, first raced in 2001, 15 points are awarded for a win, 10 for second, seven for third, five for fourth and three for fifth.

Fallon, making his first appearance in the event since 2004, made a fine start aboard Boom And Bust in the opening Mile Handicap.

The 47-year-old captain of the United Kingdom and Ireland side pushed Marcus Tregoning's 3-1 favourite to the front and never looked back, thwarting the late challenge of Trade Storm by a neck.

Suborics, who kept his 9-2 favourite poised before a strong challenge eclipsed long-time leader Woolfall Treasure by half a length, had ridden in the competition on three previous occasions. But this was his first success on the Berkshire soil.

Italian prodigy Cristian Demuro edged Desert Law (11-2) just in front for the Dash Handicap and celebrated with a Dettori-style dismount.

Chadwick's third successive second on Taajub extended the Rest of the World's lead over Europe to 12 points at the halfway stage and saw him ahead of Fallon in the individual event by the same margin.

The lead for Rest of the World increased to 17 points after the fourth race, the Classic Handicap, won by James Doyle on favourite Sun Central, as GB and Ireland closed the gap on second-placed Team Europe to six points.

Doyle, making his Shergar Cup debut, produced him down the wide outside to pull a length ahead of Ahzeemah, ridden by Take.

Aaron Gryder took the Rest of the World to a commanding 27-point lead as Viking Storm won the penultimate Challenge Handicap over a mile and four furlongs.

Johnny Murtagh's second place on favourite Ittirad saw GB & Ireland move within a point of second-placed Europe but that all changed in the final race, the six-furlong Sprint Handicap.

Chadwick powered home on Mince, but second for Canada's Chantal Sutherland and third for Turner saw the Girls move off the bottom of the table, where they had been since race one.