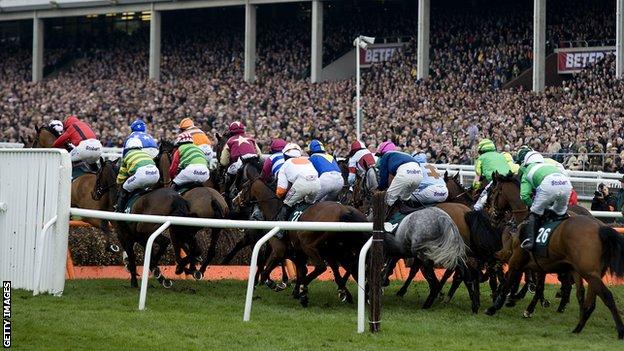 Cheltenham Racecourse have decided to reduce the amount of tickets available for Gold Cup day 2013.

The flagship event of March's Festival attracted 70,400 racegoers to the Prestbury Park site this year.

But organisers have opted to cut the allocation to around 67,000, in case bad weather affects the day.

"The attendance has gone beyond the point we could feel comfortable if the weather turned against us," spokesman Andy Clifton told BBC Gloucestershire.

236,730 people attended this year's Festival over the four days

"If the weather is nice then people tend to watch outside but if it's nasty they tend to seek shelter inside. We'd be creaking if that number of people were trying to get undercover at the same time.

"We held the Green Belt festivals on Bank Holiday weekend and at one stage we had 35mm of rain in an hour.

"If that happened on Gold Cup day with 70,000-odd people there then I don't think we've got the infrastructure to give them a comfortable experience."

The Racecourse could stand to lose £200,000 in ticket revenue from the decision, but Clifton said: "It's all about the bigger picture.

"If customers are not having a good experience they'll vote with their feet in the future.

"We've got a great reputation for looking after people and this is a way of making sure people have a great experience."