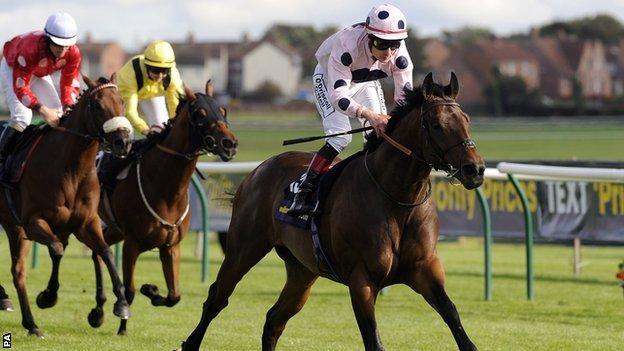 Captain Ramius romped to victory by two-and-a-half lengths in the Ayr Gold Cup as trainer Kevin Ryan triumphed for the second successive year.

The 16-1 shot, ridden by Irish jockey Pat Smullen, stormed home from a furlong out to win Europe's richest sprint handicap, worth £120,000.

Regal Parade, the 2008 winner, was second with 8-1 favourite Maarek a further length back in third.

Sholaan had led the field early on before dropping back to finish fourth.

It's an honour to win the Ayr Gold Cup. I'm thrilled

North Yorkshire trainer Ryan, who had previously won this race with Advanced in 2007 and Our Jonathan last year, said: "I'm delighted as we had four good horses going into the race.

"The ground is very testing out there. It's very tacky and even soft-ground horses don't go through it.

"After the Bunbury Cup [in July] I said to Clodagh [McStay, owner] I was going to train him for the Ayr Gold Cup.

"He's a tough horse. It's great for the owners, they've let me do what I want with him. And I'm delighted for Pat, who's come over from Ireland to ride him.

"We start thinking about this race in January and when it comes off it's great."

Smullen was riding for the first time at Ayr and was delighted with his victory.

Mass Rally (16-1) produced a storming finish under jockey Paul Mulrennan to beat the 6-1 fav Highland Colori by a short-head in a thrilling finale to the William Hill Ayr Silver Cup.

Mulrennan sealed a memorable 75-1 brace on Melody of Love (7-2) in the Group 3 Firth of Clyde Stakes at the Craigie track.