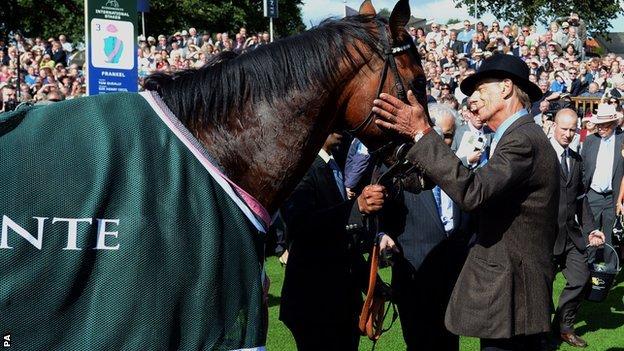 Frankel's team are expecting their unbeaten charge to face a field determined to ruin what is likely to be his final ever race later this month.

The four-year-old pleased the Newmarket crowds with a workout on Saturday ahead of Ascot's Champion Stakes.

And Teddy Grimthorpe, race manager for owner Prince Khalid Abdullah, told BBC Look East: "Every race he goes to he's got to be on top form.

"Everyone wants to have a shot at the champ," he added.

Frankel, trained at Sir Henry Cecil's Warren Place stables in Newmarket, and before the word's top-rated horse is expected to be retired to stud.

"You never say never but I think in everyone's minds this will probably be his last race," said Grimthorpe.

"We've had three wonderful years. He's been exceptional literally from day one. He's raised the bar a little bit I'd say.

"He's given everyone really tremendous times particularly Prince Khallid and everyone at Warren Place."

"We want him there in the best possible shape [for Ascot]," said Grimthorpe.

"With a horse of his calibre the expectations are enormous. But the things that have to go right for Frankel are still the same.

"He's got to be healthy, sound and in a good frame of mind. And the race has got to go pretty much to plan. There are glorious uncertainties in racing which always make it interesting."