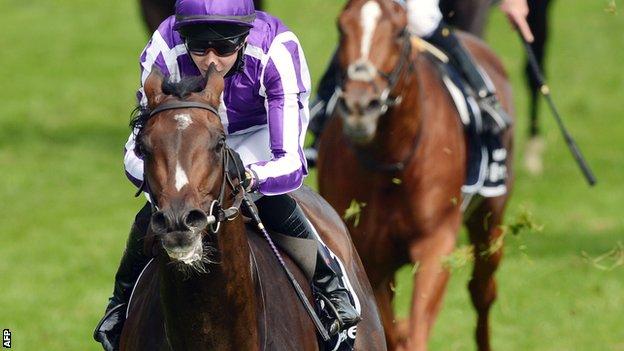 Aidan O'Brien's colt, who won the 2000 Guineas earlier in the year, has been drawn in stall five.

Camelot narrowly missed out on the Triple Crown when runner-up in the St Leger at Doncaster on 15 September.

Top Japanese hopeful Orfevre is widest of all in stall 18 as he bids to become the first horse to win from a double-figure draw since Dalakhani in 2003.

Camelot was confirmed as a runner on Wednesday, boosting the race after the withdrawals of last year's winner Danedream and British contenders Nathaniel and Snow Fairy.

Dettori is retained jockey for the Godolphin operation, and this will be his first ride for seven years for O'Brien's Ballydoyle stable.

The Italian takes over from O'Brien's 19-year-old son, Joseph, who is unable to make the weight of 8st 11lb to ride Camelot and will be on stablemate St Nicholas Abbey instead.

Dettori told Racing UK: "What an opportunity and honour to be asked to ride the Guineas and Derby winner in the Arc.

"A couple of the main horses haven't made the race, so he's right there at the top of the betting. If the Camelot we know turns up he should have a very good chance.

"It means I will have ridden in 25 Arcs in a row, which is a pretty good record, so I'm looking forward to it and am pretty excited."

Saonois, who was bought for just 10,000 euros (£8,000) as a yearling, is owned by baker Pascal Treyve and trainer Jean-Pierre Gauvin, who has 35 horses at his stables near Lyon.

Danedream was banned from travelling by vets because of quarantine restrictions.

The four-year-old German filly is trained at Cologne racecourse, which is under strict quarantine following the detection of a case of swamp fever.

British contender Nathaniel, meanwhile, was withdrawn after being found to have a high temperature on Tuesday.

The horse, trained in Newmarket by John Gosden, had been second favourite behind recent Longchamp winner Orfevre following the withdrawal of Danedream.

Gosden will instead rely on Irish Oaks winner Great Heavens, a younger sister to Nathaniel.