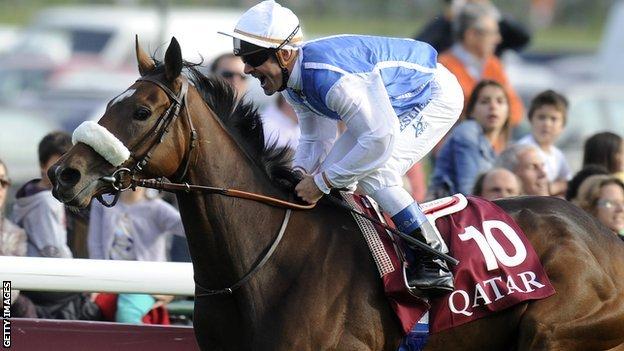 It was a fourth win in the famous race for the French jockey, who won three consecutive Arcs between 1996-98, on Helissio, Peintre Celebre and Sagamix.

Despite the obvious achievements of the Solemia team, there was a strong feeling of anti-climax after this year's Arc had been won by a horse miles down most lists of likely winners, if she was on them at all.

This was not a vintage running of the great Flat racing feature, as was always a worry on the very soft, examining going, especially after a build-up that was certainly premier cru in terms of eventfulness.

But let's remember that after the 2009 Arc we were hailing Sea The Stars as one of the all-time greats, and now we are saying the same back home about Frankel, so here in the land of Marie Antoinette was a demonstration that we can't always have our cake and eat it.

But the 33-1 outsider's sweeping run in the home straight secured the win.

The Aidan O'Brien-trained Ernest Hemingway led for much of the race but stablemate Camelot, ridden by Frankie Dettori, failed to live up to its billing as one of the favourites, finishing seventh on a rain-softened course.

"It's the Arc," said four-year-old filly Solemia's trainer Carlos Laffon-Parias. "I thought we were beaten in the straight, then I saw Orfevre stopping.

"Sometimes the jockey can make the difference and Olivier Peslier is the one who won the race."

O'Brien said of Camelot: "It was very sporting of the lads to let him run, but he wants fast ground.

"He's something for us to look forward to next season, as he will remain in training. Hopefully he has a good winter and he could be something unbelievable next year."

Dettori said: "It was just a long season took its toll."