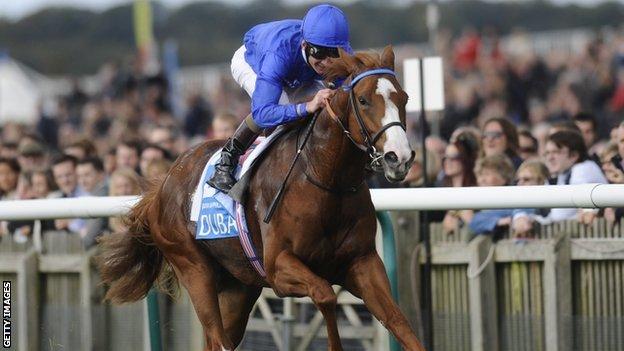 The unbeaten Dawn Approach made it look easy as he underlined his 2013 Classic credentials with victory in the Dewhurst Stakes at Newmarket.

The two-year-old, trained by Jim Bolger, is the ante-post favourite for next year's 2,000 Guineas.

Dawn Approach is the son of New Approach, who won the 2007 Dewhurst before going on to triumph in the following year's Epsom Derby.

Bolger has now had a winner in five of the last seven runnings of the race.

Leitir Mor made the early running, but once jockey Kevin Manning found a gap two furlongs out there was nothing to stop Dawn Approach recording his sixth win in a row by two-and-three-quarter lengths. George Vancouver (16-1) was third.

Dawn Approach's owner Sheikh Mohammed, who confirmed that the horse would remain in the care of Bolger next season, said: "We are very happy.

"I was impressed with him when he won his maiden and I thought he was a good horse - we were lucky. Good horses always find something."

Bolger also believes the horse has a bright future.

"My previous four Dewhurst winners were pretty smart but this one is right up there with them," he said.

"We needed a good pacemaker today and he has done his job very well. I never had any concerns. He has a lazy style of running - Kevin had to wind him up - but he got there in the end.

"He's capable of ruling the roost."

Meanwhile, the 66-1 chance Aaim to Prosper became the first horse to win the Cesarewitch twice with a determined display under Kieren Fallon.

The 2010 victor had not won a race since but beat the 7-1 favourite Countrywide Flame into second with the well-backed Tominator (9-1) in third.